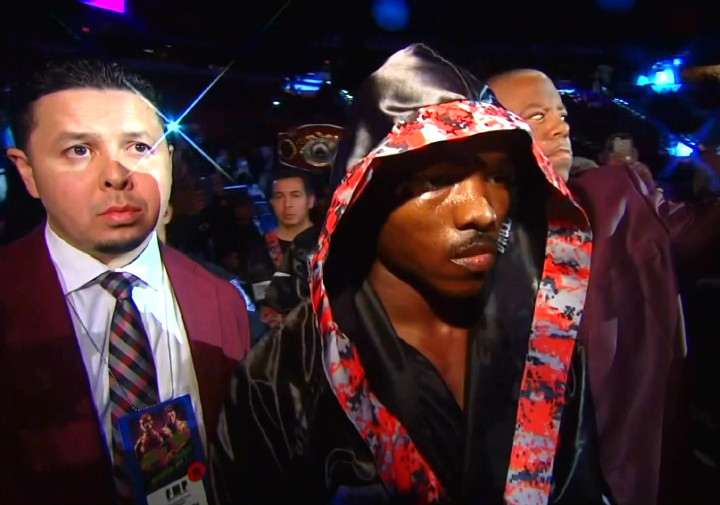 After the fight, Rios said he’s retiring. Of course, he could change his mind if his promoter Bob Arum offers him a big payday to fight one of his other Top Rank fighters like Jessie Vargas, who lost his last fight to Bradley last June.

Rios came into the fight at a career high 170 pounds, and he looked out of shape. By the third round, Rios was pretty much gassed out and it was clear that it wasn’t going to be competitive in the fight.

Bradley had too much hand speed for Rios, and he was able to tee off on him at will. Bradley used movement, holding and pot shots to control the action through the first seven rounds. By the 8th, Bradley seemed to realize that Rios was just too slow, too fat and too out of shape to do anything against him. That’s when Bradley stopped moving and holding as much and started sitting down on his shots.

In the 8th, Bradley nailed Rios with two big right hands to the head that caused his head to snap back violently. The first shot caused Rios’ legs to wobble slightly From there, Bradley went after Rios and looked like he was going for a knockout. A round later, Bradley tagged Rios with a hard body shot that put him down on the canvas. Rios barely beat the count and looked in bad shape. Seeing how hurt Rios was, Bradley wasted no time in going after him to finish him off with body shots that sent him down for the 2nd and final time in the round. Referee Tony Weeks then stopped the fight at 2:49 of the round.

As for Rios’ so-called retirement talk, I don’t buy it for a second. If Bob Arum of Top Rank wants Rios back, he’ll offer him a nice payday to fight one of his Top Rank stable fighters like Vargas, Jesse Benavidez, or Terence Crawford.

Bradley has a chance for a fight against Manny Pacquiao or Saul “Canelo” Alvarez. However, I’m not sure how many boxing fans would like to see a third fight between Bradley and Pacquiao. I know I don’t want to see it. I also don’t want to see a mismatch between Canelo and Bradley. Canelo would be way too big for Bradley, and it wouldn’t even be sporting to watch. Bradley would be running, holding and pot shotting all night long. It would be far worse than watching Canelo’s fight against Erislandy Lara in my view.