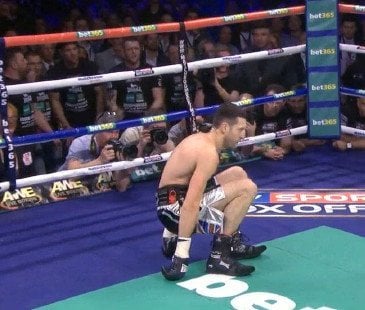 No doubt, the WBA and IBF 168-pound rematch clash is a huge deal and will be a massive event, but which of the two fighters with all that pressure riding on their shoulders will get the win? Groves has gone on record as saying he is sure he will bag a quick win, somewhere inside four-rounds, while Froch has told Groves to look forward to the pasting he is going receive. A very tough fight to call, and a genuine 50/50 affair, nothing can be ruled out.

Is Froch past his best, the number of tough fights he’s engaged in during his great career having caught up with him? Is Groves overconfident going into the sequel? Can Groves make it through the championship rounds against warrior Froch if the fight gets that far? Will the fight even reach the later rounds?

These questions and more will be answered on May 31st and, with the promise of a cracking under-card to go along with the main event so as to ensure good value for money, that record-breaking crown can be expected to be on hand to witness it all for themselves.

Benn-Eubank was a terrific and genuinely nasty rivalry, so too was Bruno-Lewis and Benn-Watson. But Froch and Groves seem to have upped the ante in the disliking each other stakes. Neither man can afford to lose on May 31st.

For what it’s worth, I feel Froch will again find a way to win. Could we even see another controversial stoppage, or maybe a controversial decision? Let’s hope not.