IBF/WBC light heavyweight champion Artur Beterbiev is going into Saturday’s 175-lb unification clash against WBO champion Joe Smith Jr with only two fights under his belt since unifying in 2019 against Oleksandr Gvozdyk.

Beterbiev vs. Smith will be headlining at Madison Square Garden in New York this Saturday, June 18th. The fight card will be shown on ESPN+ and ESPN at 10:00 p.m. ET.

“It’s the six-year anniversary of Joe Smith vs. Andrzej Fonfara, which just happened to be a 30 to 1 favorite,” said Mark Kriegel to Top Rank Boxing.

“Jerry Capobianco, Joe Smith’s trainer, told everybody in the neighborhood, don’t worry about the odds, take them long. Guess what? A lot of people on Long Island wound up with new driveways and new kitchens.

“The bad news this time is Artur Beterbiev is merely a 6 to 1 favorite. I know it was a surprise to many of us geniuses when Dmitry Bivol made relatively easy work of Canelo Alvarez, but not Joe Smith. He didn’t get a new driveway, but he made a little score,” said Kriegel.

“I’m a firm believer in this fight game that nobody stays the same,” said Joe Tessitore. “You get better or you get worse. Joe Smith has gotten better.

“This is a guy that you mention burst through against Fonfara six years ago, burst through the broken jaw against Barrera, hurting Bivol but not having enough time and coming up short there.

“But then Jesse Hart, Eleider Alvarez, and winning the vacant title against Vlasov. The guy has gotten much, much better,” said Tessitore about Smith Jr.

“The disrespect, six to one, do you understand that?” said Tim Bradley about how much of an underdog Smith is against Beterbiev. “Joe Smith Jr. has never gotten anything easy.

Can Beterbiev deal with movement?

“When he fought against [Marcus] Browne, Browne was able to survive into the latter half of the fight just by little subtle movements left and right.

“I have seen Beterbiev get hit and cut. Yes, he comes back. I’ve also seen Joe Smith Jr. get his jaw broken and continue to fight on. It’s going to be a hell of a fight,” said Bradley.

“Eight rounds with a broken jaw [for Smith Jr against Sullivan Barrera], but I think the fight we failed to mention is the [Maxim] Vlasov fight,” said Kriegel. “He was really tested in that one too.

“There was one point where he comes back to his corner and tells Jerry, ‘Hey, I don’t know if I got it here.’ Guess what? He won the championship rounds.”

“You want to know the reason why? The distance with Vlasov with his footwork, going in & out on him,” said Bradley. “He’s not going to have that with a guy like Beterbiev.

“Beterbiev is going to be right there in front of him, and you know what? To give Beterbiev some credit. He is very methodical with the way he approaches the fight, the way he gets inside, and the way he breaks guys down.”

“From mid-range to inside, that’s where he’s dangerous,” Bradley said of Beterbiev. “On the outside, you have Joe Smith dangerous from the outside because of the long reach and has a beautiful right hand that he can catch Beterbiev on the way inside,” said Bradley.

“To that point, the reports are from Beterbiev’s camp that you’re going to get exactly what you expect to get,” said Tessitore. “Marc Ramsay is the lead trainer. John Scully, the former light heavyweight contender is the co-trainer, a good guy.

“Scully was quoted saying the other day, ‘This fight is going to be everything that the boxing fans have asked for.’ The exact quote was, ‘What they want is this guy,’ mentioning Beterbiev. ‘He’s coming to destroy.’

“I love this fight Two guys at their absolute prime with every sense of themselves when they step into this ring. Here’s the thing about Beterbiev. Obviously, he’s the only active heavyweight champion with a 100% knockout rate.

“He goes in, fights, and they don’t go the distance, he gets rid of you. He’s only had two title defenses after unifying. So after that high watermark against [Oleksandr] Gvozdyk, we’ve only seen him two times,” said Tessitore.

“See, that’s the problem,” said Bradley about Beterbiev being inactive during portions of the last three years. “One, injuries, inactivity, and his age. He’s up there in age. He’s not a young whipper snapper now.

“You got Joe Smith, he’s a little long in the tooth too, but he’s a lot younger than Beterbiev. I think the inactivity could hurt him. You said just two fights, Tess?

“You had Joe Smith beating top contender after top contender, as you listed early on. I think it’s Joe Smith’s fight to win. Beterbiev, he’s extremely dangerous, and yes, he can punch, but when it comes to a guy that has more experience, in my opinion, it’s Smith,” said Bradley.

“Beterbiev squares up, does he not?” said Kriegel.

“He squares up, he comes forward, he comes through the front, straight forward when he attacks,” said Bradley. “He’s off balance a lot of the times as well. Joe Smith doesn’t have the best balance.”

Smith Jr will be chopping away

“Ask Marcus Browne,” said Kriegel. “Is he [Beterbiev] or is he not the densest specimen of human being you’ve ever seen?”

“He is, he is,” said Bradley about Beterbiev having dense muscles.

“It’s 175 pounds of a square brick wall, and the brick wall is falling forward on its opponent,” said Tessitore in describing Beterbiev’s physique.

“I’m telling you right now, the fights not going to go the distance. You’re going to have to tune in and watch this war,” said Bradley about the Beterbiev vs. Smith Jr. light heavyweight unification match.

“It’s coming next Saturday night with a 10:00 on ESPN, a three-belt unification for the light heavyweight titles, Beterbiev and Smith Jr,” said Tessitore. 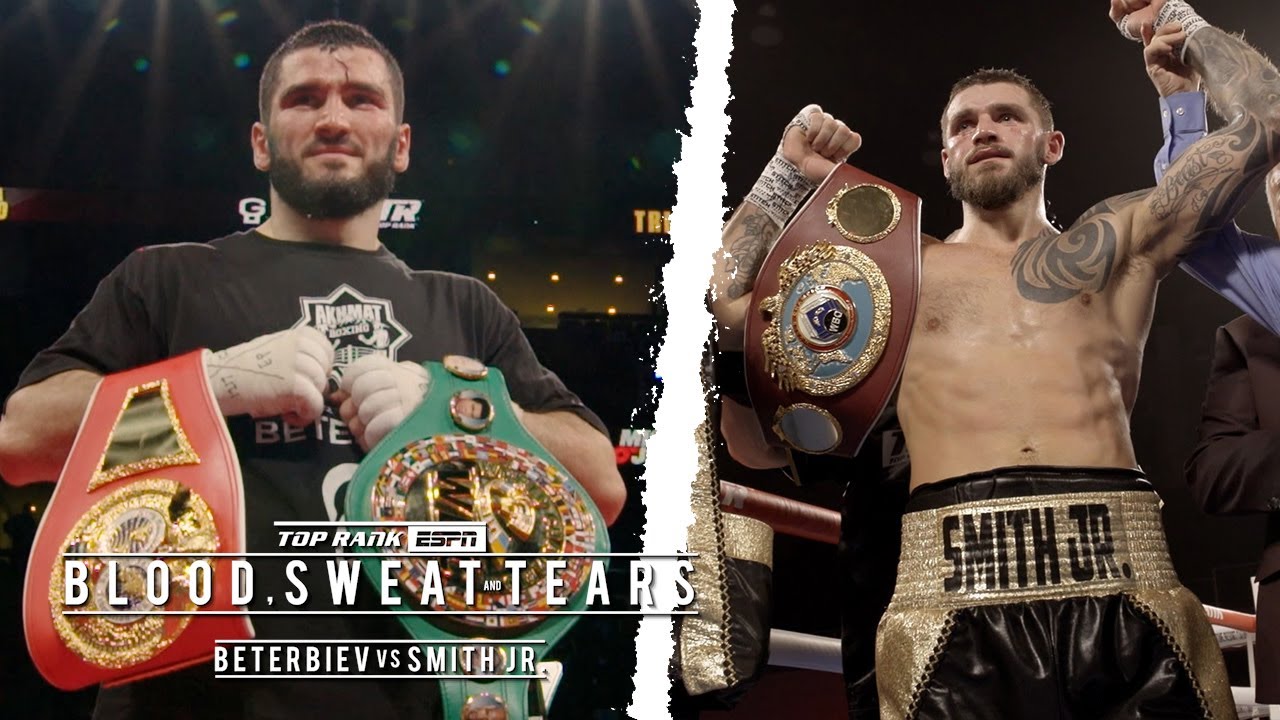