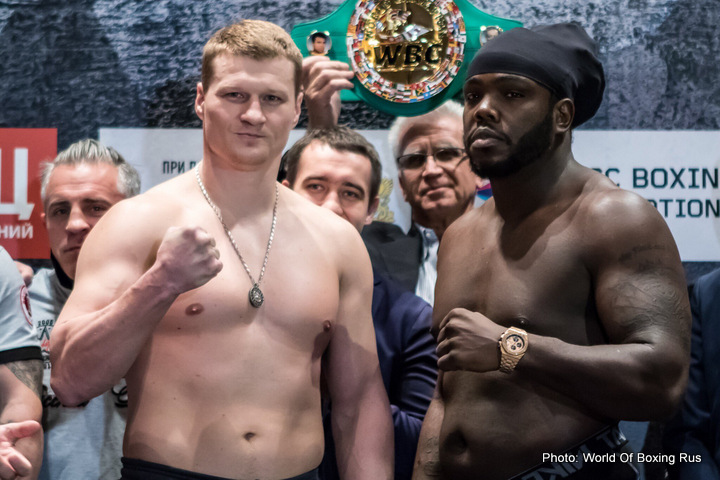 Former WBC heavyweight champ Bermane Stiverne could well be having the last big fight of his career on Saturday night in Ekaterinburg. The 38-year-old faces Russian hero Alexander Povetkin in an attempt at becoming the interim WBC champ and Stiverne says he knows he needs a KO to win.

Speaking with RT Sport just after the official press conference, a smiling and relaxed-looking Stiverne, 25-2-1(21) said there is no way he will get a decision over Povetkin should the fight go the full 12 rounds, and that he has trained for the KO.

“Yes, I do [plan to get the KO]. I have to,” Stiverne said. “I can’t come all the way here and let the judge make my decision – I gotta have my own decision. When I say I’m gonna knock him out, it’s not any disrespect thing or I’m trying to trash-talk, this is what I believe and what I trained for. Anybody who would come here and try and get a decision in his backyard would be a fool to believe that.”

Indeed, it does seem as though Stiverne, very much the away fighter, will be unlikely to get any favours from the three judges, but can the older, arguably slower man get the KO he is shooting for? Having fought just once since losing his belt to Deontay Wilder almost two years ago – and looking pretty poor in decisioning Derric Rossy after being knocked down in the fight – Stiverne has one big question mark next to him when it comes to how much he has left to offer.

Povetkin, 30-1(22) can punch himself and this fight could come down to which fighter gets his shots off first. If it’s Povetkin, as most fans seem to think will be the case, Stiverne’s very career may come to an end in Russia a couple of days from now. If he can pull it off, however, Stiverne will be registering a stunning career-reviving win. Povetkin, after all, has never been stopped.