Artur Beterbiev says he’ll be doing his “work” when he defends his IBF, WBC & WBO light heavyweight titles against hometown fighter Anthony Yarde on January 28th at the OVO Arena in London, England.

The fight is not personal for Beterbiev (18-0, 18 KOs). It’s just business, and he plans on foiling WBO mandatory challenger’s dreams of dethroning him to make his own way in the sport.

Yarde is seen as just having a puncher’s chance against the two-time Olympian Beterbiev, and his aggressive fighting style is made to order-for the three-belt champion.

If you were to create a fighter from scratch that was the ideal opponent for Beterbiev to fight, you’d end up with the 31-year-old Yarde. No matter how you look at it, this fight has early knockout written all over it.

Either Beterbiev destroys Yarde as Sergey Kovalev did, or he gets crushed by the powerful Brit in the early going. It’s pretty clear that if Yarde is going to score a knockout, it’s going to happen early in the contest because if he can’t get to Beterbiev’s chin by the third or fourth, it’ll be curtains for him.

That’s why it’s going to be interesting to see if Yarde will stick with his usual style of fighting or if his trainer will have him attempting to box on the night, hoping that he can survive long enough to make it to the later rounds to then go for the knockout.

“No, I come to do my work,” said Artur Beterbiev to Queensbury Promotions when asked if it feels any different for him to be coming to London, England, for his title defense against Anthony Yarde on January 28th. “Yeah, business work like. 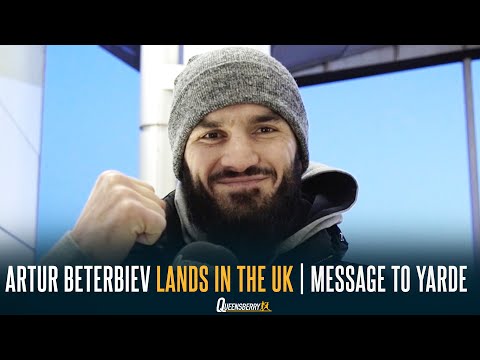 If Yarde comes out trying to box Beterbiev from the outside, that would be the first for the British fighter to employ that style of fighting because he’s always been a simple slugger since he turned pro eight years ago in 2015.

For Yarde to be tinkering with his normal style of fighting at this late stage in his career, it could be trouble, which is why he needs to continue with his normal brawling approach to winning and hope that he can get to Beterbiev before he blasts him out.