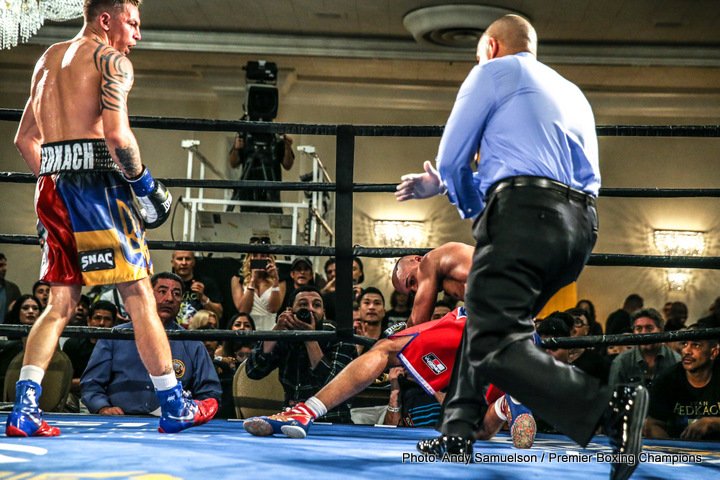 Starting slowly and tactical in the first round, both fighters threw caution to the wind commencing with the second stanza as the relentless, attacking style of Redkach clashed with Mendez’s more precise combinations. Throughout the fight, numerous clashes heads of heads took place with the southpaw Redkach and orthodox Mendez working to find their footing.

Redkach, a member of the 2008 Ukrainian Olympic team, now living in Los Angeles was also the victim of sometimes unique judgments by the referee, Raul Caiz Jr. In the third round, Redkach was deducted a point without prior warnings for rabbit punches.

With Mendez of Brooklyn, New York, scoring consistently with strong combinations, Redkach started loading up in the second half of the fight including two knockdowns, one each in the seventh and eighth rounds, neither of which were properly scored by the referee. 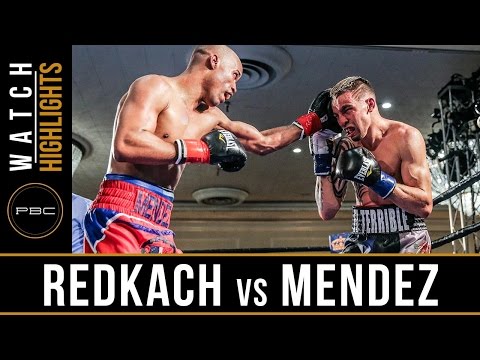 Stated a visibly upset Redkach, “The judges were wrong. I won that fight.

“I felt that I knocked him down and the referee didn’t call it and he took the point away and that cost me. I never felt any pain. I fought like I wanted to and I thought I did enough.

“They were wrong. This was my night.”

Said the happy and victorious Mendez, “I used my skill and my speed throughout the fight, but I waited to come forward until the fourth or fifth round. I knew he wasn’t going to be able to knock me out because I have great defense. I see every punch.

“I definitely slipped both times I went down. He didn’t even hit me.

“Ivan is a tough warrior. He throws a lot of wild punches and he hit me in the back of the head several times. I thought the scorecards were too close. I thought I won by a much larger margin.”

Battering away with a piston like jab and heavy handed left crosses throughout the fight, southpaw Figueroa displayed a full arsenal over the valiant but outgunned Saavedra.

Said Figueroa, “I worked the body and tried to finish it in the later rounds, but he was a tough opponent. I knew by the third or fourth round that it was going to be a really tough fight so I kept my distance, but kept trying to punish the body.

“He is a Mexican fighter that has never been knocked down so that says a lot about him right there. I knew he was going to be tough.

“I want to wait and fight next on a card with my brother and it depends when that will be, but I will be ready.”

Countered Saavedra, “He kept hitting the body, but he couldn’t take me down. He isn’t as tough as everyone says.

“I was prepared, but the travel here took a lot out of me and I didn’t feel 100 percent today. I trained 100 percent, but I wasn’t at my best in the ring, but that is how it goes.

“I wish Brandon the best of luck in his career.” 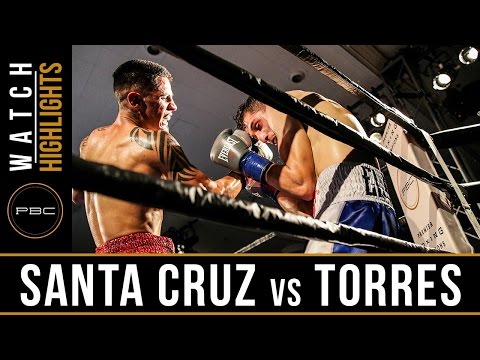 Firing away from the opening bell, both young prospects threw caution to the wind with Torres’ punches doing the great damage.

Said the victorious Torres, “I stuck to my game plan. I went forward and tried to counter every punch. If he threw one, I would try to throw five. I never really felt his power. He hit me with a good shot in the first, but after that I wasn’t fazed.

“I was motivated by all the fans cheering me on in the crowd and knowing I had a lot of people rooting for me watching at home. I really appreciate the support and can’t wait to get back in the gym.”

Stated a disappointed Santa Cruz, “He was applying a lot of pressure. He is shorter than me, so that was his game plan and it worked.

“He has good experience. This was my first six round fight. He had fought 10 rounds before. Not trying to make excuses though. He just got the better of me. I came prepared, but he did what he had to do to win.”

“I’m so excited about promoting this show, because I love great boxing and great fans and everyone knows that LA has some of the best,” said Santa Cruz. “Ivan Redkach and Argenis Mendez are always up for a fight. Mendez wants to get back in the championship ranks and Redkach wants to get to that same level. That makes for a good match. It’s also exciting for me to be able to work on a promotion with my family, the fighters from our gym and to be able to help my cousin, Antonio, launch his career.”

“I’m very thankful for this opportunity to fight Argenis Mendez,” said Redkach. “He is a solid fighter, a professional and on May 2, we’ll both be ready to put on a show for our fans. I know that this victory will lead to even bigger fights. I’m very thankful to FS1, FOX Deportes and my friend Leo Santa Cruz for making this happen.”

“As a former world champion, I know that these are the kinds of fights that I have to win to stay in contention for another championship,” said Mendez. “Ivan Redkach is a tough fighter, but I will be prepared for victory on May 2.”

It will be a family affair as Leo’s father, Jose, and brother, Antonio, will work the corner for several of the fighters on the card that train at Who’s Next Boxing Academy in City of Industry, and former world champion Omar Figueroa will be on hand to cheer for his brother Brandon.

Originally from Ukraine but now training in California with Jose Santa Cruz, Redkach most recently scored an eighth-round stoppage of Demond Brock in January in Las Vegas. A pro since 2009, the 31-year-old Redkach was unbeaten in his first 18 pro fights before dropping a contest to former world champion Dejan Zlaticanin. In his last appearance on FS1 & FOX Deportes last April, Redkach fought to a split-draw in a back and forth contest against Puerto Rican contender Luis Cruz.

A 2004 Olympian for the Dominican Republic, Mendez lives and trains out of Brooklyn as he seeks a world title in a second weight class. The 30-year-old won his world title with a knockout victory over Juan Carlos Salgado in 2013 and defeated former world champion Miguel Vazquez in his second fight as a lightweight in 2015.

The 20-year-old Brandon Figueroa turned pro in May of 2015 by defeating Hector Gutierrez and followed that up by stopping Ricardo Mena, Ramiro Ruiz and Francisco Muro to close out the year. The Weslaco-native has stayed busy in 2016, picking up six victories, including five by way of stoppage before starting 2017 with a fourth-round stoppage of Raul Chirino in February.

Fighting out of San Luis Potosi, Mexico Saavedra made his U.S. debut in November of last year, winning a six round decision over Josue Morales in Texas. A pro since 2014, Saavedra won four of his first five fights and has never been stopped in nine bouts heading into his television debut on May 2.

Part of the fighting Santa Cruz family, the 20-year-old Santa Cruz enters this fight on a four-bout winning streak including a 2017 debut that saw him win a unanimous decision over Victor Torres in January. A pro since 2015, Santa Cruz fights out of San Gabriel, California and will look to make it five straight wins on May 2.

The 21-year-old Torres enters this fight a five-bout winning streak including three victories in 2016. The fighter out of Tlajomulca, Jalisco, Mexico most recently scored a second round knockout of Rafael Rivera last November in California. He will fight for the fourth time in the U.S. on May 2, having never lost stateside.