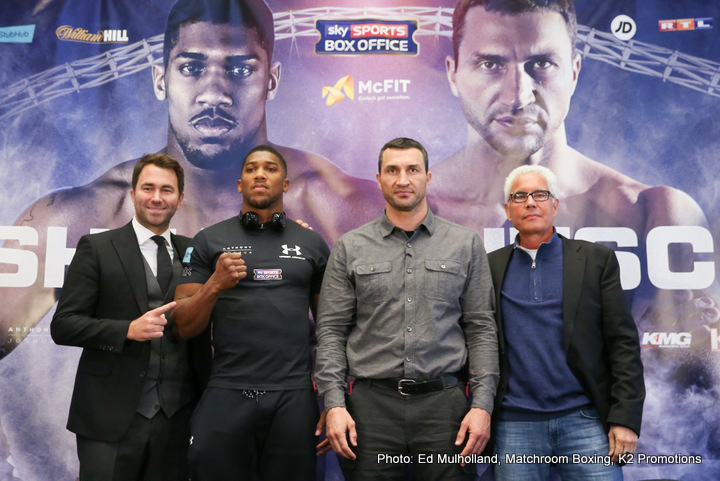 It won’t be too much of a shock if WBC heavyweight ruler Deontay Wilder scores a KO victory tonight; in fact most fans are fully expecting Wilder to despatch his fifth title challenger Gerald Washington inside the distance. However, it will be something of a sensation if reigning IBF heavyweight champ Anthony Joshua scores a KO in his next fight.

Joshua of course faces former king Wladimir Klitschko, on April 29, with the WBA title also on the line, and AJ has predicted a KO win. As fans know, Klitschko has not been stopped since way, way back in 2004, when he suddenly collapsed from sheer exhaustion in his brutal fight with an unbelievably tough Lamon Brewster. But Joshua, who has KO’d or stopped each of his 18 pro opponents, tells British GQ Magazine that he will be the first man in 13 years to take out “Dr. Steel Hammer.”

“I think I will knock Klitschko out,” Joshua told the magazine. “I’m not superstitious about it, but I have a feeling that it will happen in a slightly unexpected way. It will be something like a counterpunch that will finish it. It won’t be quick – it will take time because he is so experienced and he isn’t easy to hit. But I will find my opportunity and I will take it. When I hurt someone it annoys me when they [the ref] don’t let me finish them. Honestly! Because that is my job.”

If Joshua can score a KO win over Klitschko – for some people still the best heavyweight in the world despite his “bad night” against the now inactive Tyson Fury – he will become a true global star overnight. But can AJ do it? The experts and the bookmakers are about as split down the middle as can be as far as who wins, let alone whether either guy wins by KO.

Klitschko, 64-4(53), with his own vaunted power and great experience, might well be the man scoring the KO in April in front of 90,000 fans. At the end of the day, this is what fans want in a big heavyweight showdown: an emphatic winner either way. Still, it is not too hard to envisage a distance fight taking place in April. Above all, let’s hope we get a good fight. 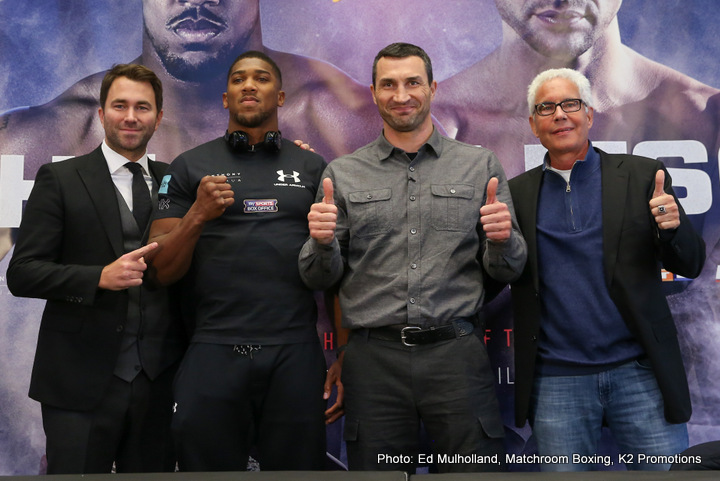