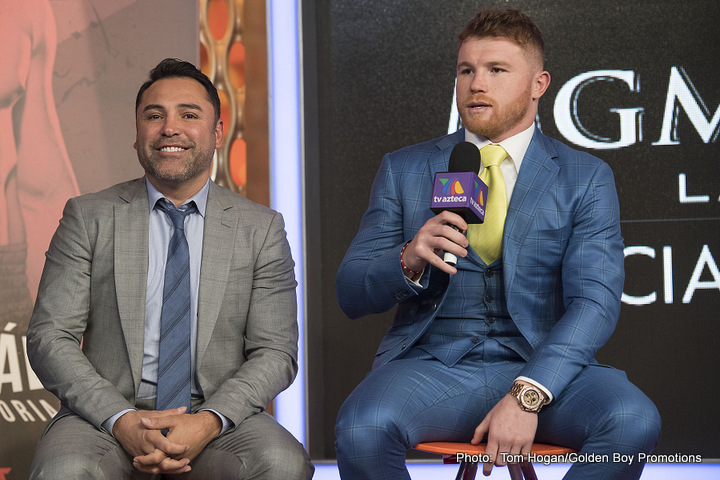 Fan interest in the upcoming May 6 clash between Canelo Alvarez and Julio Cesar Chavez Jr. continues to grow, and Oscar De La Hoya is doing a great job of promoting the all-Mexican bout. With pride at stake, the unofficial “Battle of Mexico” promises to bring out the best in both men. No further hype is required to sell the fight but De La Hoya is providing some anyway.

Calling the fight a “civil war,” the Golden Boy head predicts just this: a war. And though the younger, more consistent Canelo remains a healthy favourite to get the win over the Cinco de Mayo weekend when the fight will take place, more and more fans seem to be giving Chavez a decent shot at scoring the upset. Focused, he claims, like never before and back in love with his sport, Chavez’ physical appearance has convinced many that he means business. Already looking slimmed down and in shape, Chavez appears to have put his previous weight issues and motivation problems behind him – for this fight at least.

De La Hoya expects a war as he has said; maybe one as special and as thrilling as the first classic Erik Morales-Marco Antonio Barrera epic that recently celebrated its 17th anniversary. That unforgettable fight saw two fiercely proud Mexicans unwilling to give a single inch, warring for all 12 astonishing rounds. De La Hoya, in speaking with ES News, said the Canelo-Chavez match-up reminds him of the electrifying super-bantamweight fight from 2000.

“I think the fans are waiting for a good fight,” De La Hoya said. “We haven’t had a great match-up where the fans know it’s going to be guaranteed action in such a long time. The last time I can remember a fight like this with two Mexicans in the ring is Barrera versus Morales, and that was 17 years ago. This is the type of fight that excites boxing fans.”

De La Hoya could have mentioned the more recent Rafael Marquez-Israel Vazquez classics from 2007/2008 when comparing Canelo-Chavez to other truly great all-Mexican battles, but we get the point: Oscar thinks the May 6 fight will be special. The nearer the 164.5-pound catchweight fight gets, the more people are agreeing with him.