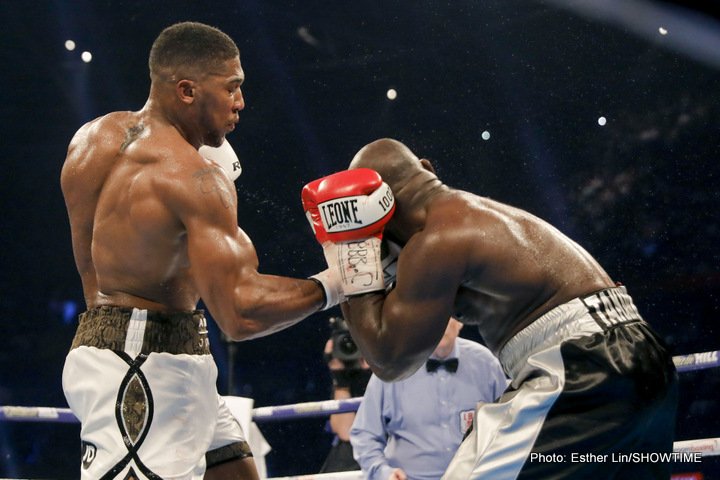 He has fought just twice this year, but how Anthony Joshua entertained us, thrilled us and given us value for money in doing so. There seems to be little doubt AJ, the WBA/IBF heavyweight ruler, is THE most consistently exciting big man on the planet today.

Some fans will point to WBC champ Deontay Wilder, but never has Wilder given us the kind of sustained action Joshua gave us last night in finally (and via premature stoppage) getting rid of an incredibly game Carlos Takam, as well as earlier in the year in his titanic, off the floor win over Wladimir Klitschko.

If you want great heavyweight action with knockdowns and knockouts, Joshua is the man to pay to see do his thing. But being the most exciting heavyweight in the world does not make you the best. Or does it? Is Joshua the best right now, or do you favour Wilder, maybe even Joseph Parker, or one of the unbeaten up and coming contenders? Joshua – who we must not forget is still only 20-0(20) and has been boxing as a pro for just four years – says he wants all the belts in 2018 and it sure is going to be a lot of fun watching to see if the division’s star can get his hands on them.

The much talked about Joshua-Wilder showdown, one that simply has to happen next year, could be an absolute epic. Both men can really bang, yet both have flaws; defensive in the case of Wilder (Wilder also having a suspect chin in the opinion of quite a few, even though he remains unbeaten) and stamina in the case of Joshua. Who can really say with certainty who wins this one? Let’s hope Wilder is able to come through against Bermane Stiverne in next Saturday’s rematch (for a few fleeting seconds here and there last night, the upset looked just a little bit, just maybe possible; with Takam winning over the hearts of everyone with his incredible effort).

We need both Wilder and Joshua to remain unbeaten for their fight to be the monster it really can be. We’ve seen great excitement from AJ already (blowouts aside, has he ever been in a bad fight: his wars with Dillian Whyte, Klitschko and Takam being three memorable battles he now has on his C.V) – but there promises to be even more thrilling stuff to come.