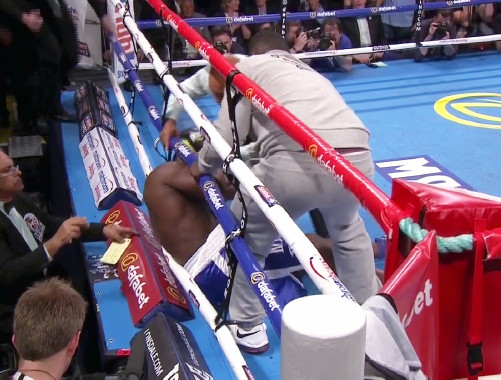 On last night’s ‘Rule Britannia’ show from London – in which the British world title challengers enjoyed mixed fortunes – gold medal winning Olympian Anthony Joshua (13-0 , 13ko) absolutely destroyed American challenger Kevin Johnson inside 2 rounds to send shock-waves up the rankings and further put the division on notice regarding his arrival as a serious player.

Johnson – who had been sold as having never been stopped – was expected to give Joshua at least a few rounds, promising he would deliver and be the Brit fighters biggest test to date. And on paper – he was.

Despite having lost 4 of his last 5 going in, much was made of his durability – and it’s true he had extended both Tyson Fury and Dereck Chisora the 12 round distance – yet as soon as he tasted the Watford man’s power last night – we knew it was going to be a short fight.

To be fair, it’s amazing Johnson even got out of the first round given the rollocking he took – and I wasn’t surprised to hear him announce after the fight that he intends to retire.

As for Joshua – what do they do with him now?

Already ahead of last night he had his next fight penciled in – against a TBA opponent on the big July 18th Matchroom Show – which will likely be the next PPV – yet in ring post fight last night, Eddie Hearn promised it will be September 12th that “a big name opponent” will be lined up for him.

Sounding as though the ink is already dry on a deal, yet then conceding ‘a few names’ were in the frame – Eddie said;

I don’t know why but something tells me Hearn would love a massive showdown with David Haye – and so would the fans.

The Hayemaker has been constantly telling anybody who will listen that he intends to make a ring return this year – and given the magnitude of a potential Joshua fight – and the money involved – I genuinely believe he could be tempted out of retirement.

There will of course be those who would say such a fight is far too soon, that Haye is too ring savvy, smart and powerful for Joshua – but his advancing years and smaller size, coupled with his inactivity – all make for a far more level playing field for me.

After the fight, all parties appeared to acknowledge that the time has come for the ‘L’ plates to come off – and for even more credible and stern tests to be presented.

Against fighters with winning records, that’s for sure. And even if Haye is unrealistic in the eyes s of many, I believe a big Commonwealth title showdown with Australia’s undefeated champion Lucas Browne would be an absolute cracker of a fight. Failing that – a massive domestic showdown with old amateur foe – Londoner – Dillian Whyte – would be massive here.

It is a fight that has been simmering away under the radar now since Whyte returned from a 2 year exodus from the sport last November.

“This is what I’m here to do – to try and make statements.”

We wait with anticipation the next step in the Anthony Joshua journey. Whatever that may be.