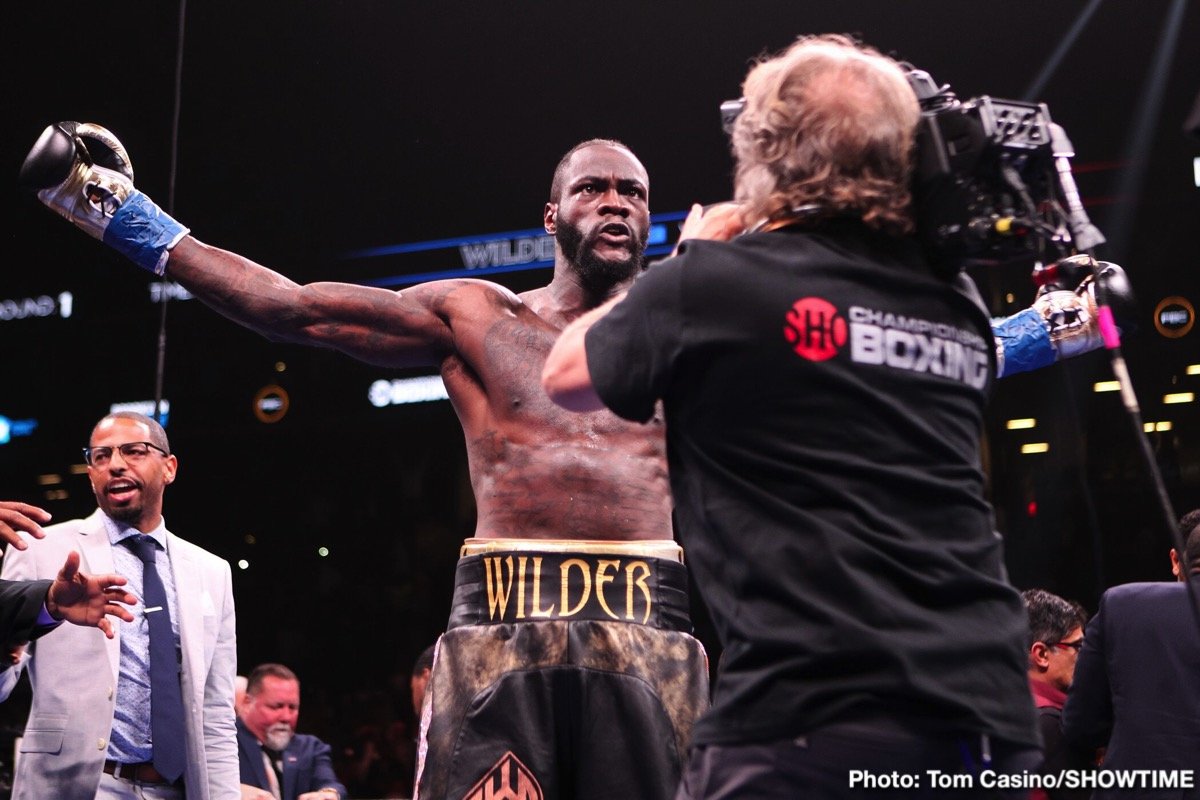 Boxing’s longest reigning heavyweight world champion Deontay “The Bronze Bomber” Wilder will take on his most dangerous challenger to date when he defends his WBC title in a rematch against once-beaten Cuban slugger Luis “King Kong” Ortiz in the main event of the FOX Sports PBC Pay-Per-View Saturday, Nov. 23 at the MGM Grand Garden Arena in Las Vegas.

Three-division champion and current WBA Featherweight Champion Leo “El Terremoto” Santa Cruz will seek a title in another division in the co-main event when he takes on Miguel “El Michoacan” Flores for the WBA Super Featherweight Championship as part of the pay-per-view action beginning at 9 p.m. ET/6 p.m. PT.

Wilder and Ortiz will renew the rivalry they set in motion when they first engaged in an explosive showdown in Brooklyn that was one of 2018’s best fights. Wilder won that bout by 10th round TKO after Ortiz stunned him and almost had him out in the seventh round. The thrilling match featured plenty of twists and turns to necessitate a rematch.

With a combined 66 knockouts in 74 matches, Wilder vs. Ortiz II is a heavyweight duel that guarantees an awesome display of punching power. The first fight last year saw Wilder dropping Ortiz in the fifth round, Ortiz stunning and hurting Wilder in a seventh round that he won 10-8 on all the judges’ cards, and Wilder eventually dropping Ortiz again with a powerful right uppercut that forced the referee to stop the bout in the 10th round.

“We are thrilled to add this phenomenal heavyweight rematch between Deontay Wilder and Luis Ortiz to an exciting month of entertainment at MGM Grand,” Richard Sturm, President of Las Vegas Live Entertainment and Sports, said. “We can’t wait for fight fans to witness what is sure to be a ‘knockout’ of an evening at the Grand Garden Arena.”

Wilder (41-0-1, 40 KOs), a bronze medal winner for the U.S. boxing team at the 2008 Olympic Games, has more than lived up to the nickname “The Bronze Bomber.” The 33-year-old Wilder has knocked out all but one of the men that he has faced in the ring, making him one of the most feared single-punch knockout artist in boxing today.

Wilder coming off win over Breazeale

The most active heavyweight champion in the sport, this will be Wilder’s third title defense in 11 months. He is coming off a highlight-reel first round knockout of Dominic Breazeale in Brooklyn on May 18. Before that had one of the most dramatic matches of 2018 when he dropped Tyson Fury twice, including a stunning knockdown in the 12th round, on the way to a split draw last December.

Born and still living and training in Tuscaloosa, Alabama, Wilder will return to fight at MGM Grand in Las Vegas for the first time since he won the heavyweight title with a dominant 12-round decision over Bermane Stiverne on January 17, 2015. The victory had even more significance for Wilder because it came on the birthday of his boxing idol, Muhammad Ali. The rematch against Ortiz will be his 10th title defense.

Wilder: No one wanted to fight Luis Ortiz

“When I fought Ortiz not only did he have the pedigree, but also he had the classification of being the boogeyman of the division,” said Wilder. “I agree with those who say that Luis Ortiz was my toughest fight to date. No one wanted to fight him and they still don’t. In the rematch there’s more confidence and more motivation to do what I have to do. I’ve already seen the style before. It’s going to make it more fun. I can’t wait to see how he tries to handle me when I’m at my best.

“This is the second big fight for me under my company, BombZquad Promotions, and I’m very happy about that. We still have a lot of work to do to build it into the kind of company that I know it’s going to be in the future, but it’s coming along. To be able to do a FOX Sports PBC Pay-Per-View at MGM Grand in Las Vegas under my own banner is fantastic.”

Ortiz (31-1, 26 KOs) has ripped off three-straight victories since suffering the only loss of his career in that first match with Wilder in 2018, including most recently winning a unanimous decision over Christian Hammer on March 2. The southpaw, who was born in Camaguey, Cuba and now lives in Miami, is one of the most avoided heavyweight contenders in boxing because of his vicious knockout power and crafty southpaw boxing skills. In the first fight with Wilder, Ortiz hurt Wilder with a textbook counter right hook that nearly made him the first Cuban heavyweight world champion.

Outside of the ring, Wilder and Ortiz share a common bond-they’re both motivated to fight for their daughters. Wilder’s oldest daughter, Naieya, was born with spina bifida, motivating Wilder to take up boxing to pay for her medical expenses. Ortiz’s daughter, Lismercedes, has a painful skin condition called epidermolysis bullosa, which results in painful skin blistering and Ortiz has worked to raise awareness for.

“I have to give Deontay Wilder a lot of credit for taking this fight because it shows he has the heart of a true champion,” said Ortiz. “He is not at all scared to take a dangerous fight, because let’s be honest, this is the most dangerous fight for him. In my opinion, he’s the best heavyweight in the world until someone beats him, and that’s exactly what I’m going to do on November 23 at the MGM Grand Garden Arena on FOX Sports PBC Pay-Per-View. ‘King Kong’ is coming to Las Vegas!”

A three-division world champion fighting out of Los Angeles, Santa Cruz (36-1-1, 19 KOs) holds the WBA featherweight title and will be making his debut at super featherweight and seeking a title in a fourth weight class. The 31-year-old has been a dominant force in the featherweight division since 2015, including two thrilling featherweight title duels against Abner Mares and Carl Frampton each. He lost the belt in his first match against Frampton in 2016, but reclaimed it in their rematch the following year. Santa Cruz has competed in title bouts in 16 of his last 18 fights, while picking up belts at 118, 122 and 126-pounds and is coming off a unanimous decision victory over Rafael Rivera in his last fight in February on FOX.

“I know Flores is another tough Mexican boxer like me. He always comes forward, so it’s going to be a fun fight for the fans. I’m really looking forward to fighting again in Las Vegas at MGM Grand. It’s going to be a really exciting atmosphere because you have Deontay Wilder and Luis Ortiz in a heavyweight championship fight, and Deontay always knocks his opponents out, but we’re hoping that our fight will steal the night.”

Flores (24-2, 12 KOs) was originally scheduled to fight Santa Cruz for the featherweight title in February, but severely sprained his ankle in training and had to withdraw from the fight. Born in Mexico, but raised in and fighting out of Houston, Flores rose up the rankings with victories over Ryan Kielczweski, Ruben Tamayo and Mario Briones. After suffering a loss to Dat Nguyen and seeking to rebound, Flores was ahead on the scorecards against Chris Avalos in a fight on FS1 when the contest was stopped due to a cut on Flores’ eyebrow that was controversially ruled to have come from a punch. Flores bounced back from that loss to stop Raul Chirino in April 2018 and also scored a TKO victory against Luis May in his most recent fight on June 29 after the ankle injury.

“I’m extremely excited to be getting this opportunity once again to fight Leo Santa Cruz and win a world title,” said Flores. “Being the co-main event on this FOX Sports PBC Pay-Per-View card with Wilder vs. Ortiz headlining is incredible. This is a dream come true for me, and I’m going to take advantage of the situation. This moment in my life is something I’ve envisioned since I was a kid. On November 23, you will see the best version of myself as I plan to be in the best shape of my life, with the goal of becoming a world champion, and what better way to do it than in Las Vegas at MGM Grand. Leo and I are going to put on a great show, that you can guarantee.”

Deontay @BronzeBomber Wilder will defend his WBC world heavyweight belt in a rematch against Luis Ortiz.#WilderOrtiz2 coming to FOX PPV on November 23! pic.twitter.com/vpzpDgUpTd