Luis Ortiz is planning on making sure he finishes the job when he hurts WBC heavyweight champion Deontay Wilder in their rematch on November 23 at the MGM Grand Garden Arena in Las Vegas, Nevada.

Ortiz (31-1, 26 KOs) was unable to put Wilder (41-0-1, 40 KOs) last year in March in their previous fight after having him teetering on the brink of a knockout in round 7 at the Barclays Center in Brooklyn, New York.

Conditioning was a factor for Ortiz against Wilder

Ortiz, 40, was foiled by the delay of the 8th round. This time, Ortiz plans on getting Wilder out of there by fighting at a faster pace. Wilder looked like he was on weak legs at the start of the round, but Ortiz couldn’t connect with anything clean enough to get him out of there.

If Ortiz’s stamina didn’t give out on him, he would have won the fight. Ortiz punched himself out in round 7, and he didn’t have enough left in the tank to score a stoppage in the subsequent rounds. Once he recovered, Wilder was then able to come back and knockout Ortiz in the 10th.

Earlier on Saturday, the Wilder-Ortiz 2 rematch was officially announced for November 23 on FOX Sports PBC Pay-Per-View. The chief support is super featherweight Leo Santa Cruz facing Miguel Flores for the WBA title. Santa Cruz is a good fighter, but this isn’t much of a match-up.

“1000 percent. Obviously, because we showcased ourselves in the first fight, and in the second fight, ‘let’s just get it on and finish it,'” said Luis Ortiz to secondsout about his rematch with Wilder. “They say a lot of things, but they still got to get in there on November 23, and fight me. At the end of the day, we’ll have an interview on November 24th, and we’ll ask the same questions. My age has only given me wisdom, maturity, confidence, strength, so, no,” said Ortiz in responding to a question about whether his age might be an issue for him.

“Only the lightweights run harder than me. I will fight harder, stronger, faster, shorter, taller, all that,” said Ortiz in how he’ll take advantage of Wilder if he hurts him again like he did in the 7th round last year. “Yes, I saw a lot from Wilder, but I’m not going to divulge what I saw. [Tyson] Fury doesn’t have s—. He just talks a lot of s—. He just needs to shut the hell up,” said Ortiz when asked what he learned from watching the Wilder vs. Tyson Fury fight last December.

With Wilder’s punching power, Ortiz will need to be careful if he has him buzzed. Wilder has the kind of power where he can knock anyone out if he lands something flush. He loses his legs when he’s hurt, but he’s still dangerously powerful even then.

“I think [Anthony] Joshua will be the victor, and probably a decision. He’ll maybe use his legs, and stay on the outside, and do what he should have done,” said Ortiz when asked who wins the Anthony Joshua vs. Andy Ruiz Jr. rematch on December 7th in Saudi Arabia.

“It’ll be a tough fight again for Joshua, but I don’t think the venue will help Ruiz. I think Ruiz has less to lose than Joshua. At the end of the day, Joshua will pull it out with a running victory by boxing and moving. He’ll get a decision,” said Ortiz.

Ortiz thinks Anthony Joshua is going to use his legs to stay on the outside against Ruiz in their rematch. The only time Joshua has ever used his feet to avoid an opponent was his fight against former WBO heavyweight champion Joseph Parker. However, that was a fight where the referee was more of a factor in Joshua’s win than his mobility. The referee was pulling Parker off of Joshua the entire fight, and it was an impossible situation for the New Zealander. He couldn’t get passed the referee to land his shots on Joshua. With that kind of referee, Joshua can’t be beat unless Ruiz shoves him out of the way.

Deontay @BronzeBomber Wilder will defend his WBC world heavyweight belt in a rematch against Luis Ortiz.#WilderOrtiz2 coming to FOX PPV on November 23! pic.twitter.com/vpzpDgUpTd 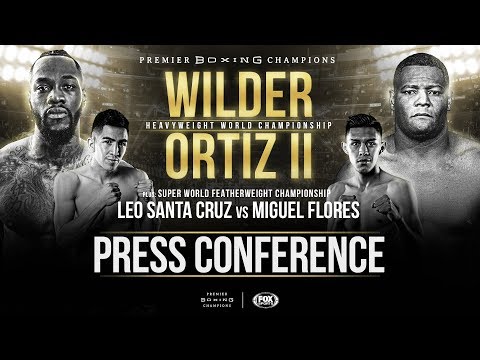