Tonight, on the big Anthony Joshua-Kubrat Pulev card at Wembley, heavyweights Martin Bakole and Sergey Kuzmin battled hard for all ten rounds. In the end, after a thoroughly entertaining scrap, Bakole of Kananga, Democratic Republic Of The Congo, now based in Scotland, got the unanimous decision victory. Scores were 98-92, 97-93 and a more accurate and telling 96-94. Bakole is now 16-1(12). Russia’s Kuzman lost for the second time in his pro career in falling to 15-2(11).

Going into tonight’s card, plenty of fight fans felt this match-up would produce the best fight of the night and this may turn out to be the case. Both Bakole and Kuzmin tested each other tonight, and both guys had to show a good chin. Bakole, looking in better physical condition than Kuzmin, who looked a little fleshy around the waist, started off fast and he got the better of things. Bakole has pretty fast hands for such a big man and he took it to Kuzmin and began scoring and picking up points. Bakole’s jab was serving him well. Kuzmin was also taking some right hands early on. Bakole seemed to hurt Kuzmin in the second, but the Russian covered up and then fired back, wildly. 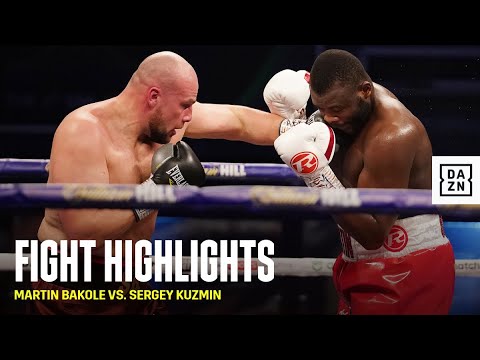 The third saw Bakole’s superior work-rate continue, with smaller man Kuzmin struggling a little. By the middle stage of the fight Bakole suddenly appeared to feel the pace and the fight took on a different script. Kuzmin was now having his turn in landing heavy rights to the head. A very good fight was shaping up. Bakole looked gassed in the sixth, giving fans the impression that he might have punched himself out. When getting in close, Kuzmin proved he was the boss. Kuzmin looked the more comfortable fighter in there at this stage and the end result was in no way certain. Kuzmin blasted Bakole with a huge uppercut in the eighth, with Bakole hurt on the ropes. Bakole really did look to be almost completely out of gas now.

Bakole’s best weapon was his jab, but Kuzmin looked to be the stronger fighter. In the 10th and final round, Kuzmin landed another big right hand to the head, again testing Bakole’s beard. Kuzmin was again landing the more eye-catching punches here in the final session. Then came the final bell. A very good, engrossing fight, one that looked to be closer than two of the official cards had it. Bakole, who has called for a rematch with Michael Hunter, is certainly an entertaining heavyweight who gives his all. Perhaps a return with Hunter will happen some time next year. It’s tougher to suggest where Kuzmin (who has also been beaten by Hunter) goes from here.