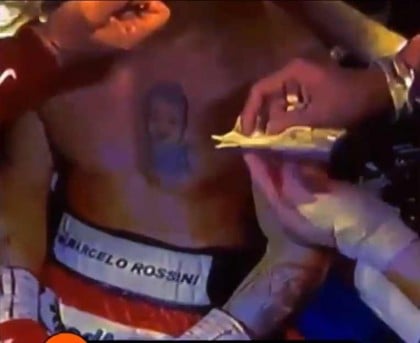 After Adrien Broner suffered his first professional loss to Marcos Maidana this past Saturday night, the feeling of impending drama was fierce.

Maybe it wasn’t the loss itself, but instead the way Maidana took over and made it look like a high quality sparring session. Broner, the young champion that has been making high waves in the boxing community, suffered a similar fate as Andre Berto, who also appeared like a possible boxing sensation before the limit of his boxing ability was exposed.

Now, after all is said and done, Marcos Maidana and his team are under formal investigation for possibly, cheating. In a video posted by TMZ, Alex Ariza is holding a napkin, and at one point, in a low quality replay, looks like is placing a while pill-sized object onto the napkin, and then bringing that napkin to Maidana’s mouth.

After the video was released, Alex Ariza took his explanation to the press, and explained what the video is truly showing.

“Look, they’re just dental rolls. They’re not as clumsy as gauze pads. When I say clumsy, I mean when you pull them out, they don’t unravel. They stay tight,” stated Ariza in an interview with FightHype.

Ariza goes on to say that he always keeps one of those in his pocket, in case the situation calls for it.

For the sake of boxing, the sport that has been a victim of too much embarrassment due to illegal performance enhancing drugs as of lately, I hope that this investigation provides a result that leaves this fight and its result, legitimate.