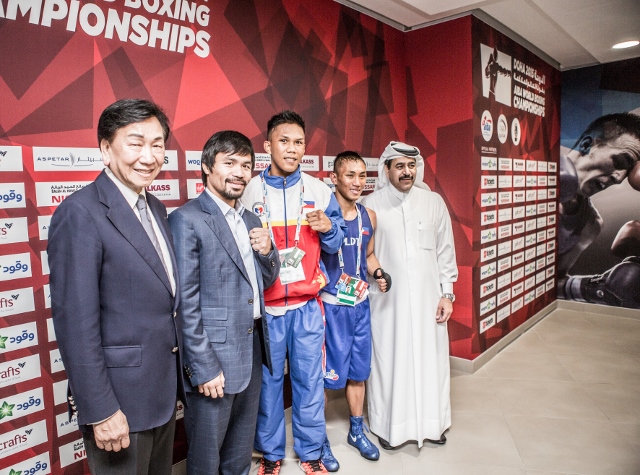 “It was an honour to be invited by Dr Ching-Kuo Wu and AIBA and Yousuf Ali Al Kazim, and it is a pleasure to be here among these exceptional boxers and supporting my fellow countryman Rogen Ladon at the historic first edition of the competition in the Middle East,” said the eight-time World Champion.

The “People’s Champion” joined the crowds for the start of the afternoon session on day three of the competition to cheer Ladon as he took on Mexico’s number one boxer and two-time PanAmerican Games champion Joselito Velazquez.

His presence was clearly a source of huge inspiration for the young Filipino, and Ladon was quick to gain the advantage over the number-one seed. Velazquez responded well, but was ultimately overcome by the occasion and was comprehensively beaten 3:0 on points

Pacquiao was quick to congratulate his fellow countryman after the bout, and was impressed by the standard of competition. “The boxers here are chasing not just gold,” said Pacquiao, “but a place in their national team for the Olympic Games, the dream of any sportsman and the result of years of hard work. The Qatar Boxing Federation and Local Organising Committee have provided a magnificent stage for them to compete on.”

At the opening press conference on day one of the 2015 AIBA World Boxing Championships, the President of AIBA Dr Ching-Kuo Wu made the surprise announcement that Manny Pacquiao, one of the greatest boxers of modern times, will be amongst the spectators in Doha.

Pacquiao will arrive in Doha on Thursday and watch the afternoon session.

Highlighting the importance of such a high-profile name coming to the competition, Dr Wu said: “This is the benchmark for future World Championships and I am pleased that Manny Pacquiao accepted my invitation to come and share his thoughts and ideas first hand.”

“We are very happy with the decision to choose Doha to host the 18th edition of our competition. This is a top class venue with top class athletes, and it will make for a fantastic championship”, he said.

Asma Bint Thani al Thani of the Qatar Olympic Committee reflected on the opening ceremony and the impact of the competition on the city. “Last night we saw a breathtaking opening ceremony involving people from all over the world. It is very important for us here to bring this event to life and introduce the noble art of boxing.”

It was a sentiment echoed by Yousuf Ali Al Kazim, president of the Qatar Boxing Federation. “What really left an impression were the key messages of transparency, friendship and effort, values we would like to highlight in our efforts to promote boxing in particular – and sport in general – in Qatar.”

“We want to leave the best possible experience for athletes, spectators and our guests, and we are keen for success and hope to host more AIBA comps like the APB or WSB in the future”, said Al Kazim.