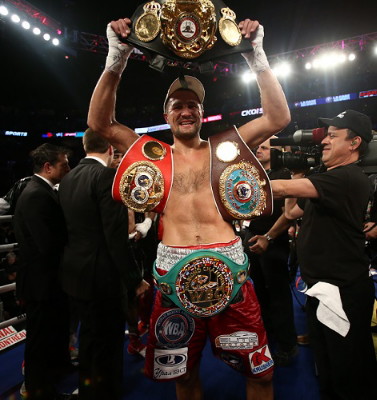 WBO/WBA/IBF light heavyweight champion Sergey Kovalev, has had his scheduled November 28th homecoming in Moscow, Russia postponed as his team at Main Events reportedly chase down a huge showdown with WBA (sup) 168 lb boss Andre Ward, according to multiple sources.

Kovalev, last seen making short work of French challenger Nadjib Mohammedi in July, now has a likely January date on HBO, meaning that the turnaround time between the November Moscow date and that next outing is simply too short.

“[The Moscow date] has been postponed due to scheduling conflicts. Kovalev will return to the ring very early in 2016. The date, opponent and location will be revealed shortly,” Main Events CEO, Kathy Duva said this week. “The two fights [Nov/Jan] would simply have been too close together.”

“As we worked on Sergey’s schedule for next year, it became clear that the best course would be to schedule his first bout in 2016 as early in the year as possible,” she added. “While Sergey is disappointed that the bout in Moscow must be postponed, he understands that the change in schedule is necessary at this time, and he will return to Russia to fight in front of his fans there as soon as possible.”

Ward is coming off of his blitzing of overmatched British challenger Paul Smith back in June – a fight that was contested at a 172 lb catch-weight as he looks to make the jump to 175 lb good and proper. A mooted appearance on November’s Cotto/Canelo undercard is still no nearer to being confirmed either, despite Ward telling fighthype.com recently he would know in a matter of days.

Speaking about the talks with Ward’s team at Roc-Nation – which are ongoing – Duva said;

“I can tell you we are having great conversations. That’s [Ward] the fight I’ve been saying all along is inevitable. Our talks are continuing, and they are very amicable.”

The other sought after option for Kovalev at 175 is of the course the unification with WBC/lineal champion, Adonis Stevenson, who took to calling Kovalev out after his recent maligned win over Tommy Karpency in an effort to at least appear as though he wants that fight.

The Al Haymon ‘advised’ Stevenson has been offered a 50/50 purse split by Main Events for a fight in his Canadian backyard. The only pre-requisite remains it must be on HBO PPV – where Kovalev enjoys an exclusive broadcasting contract.