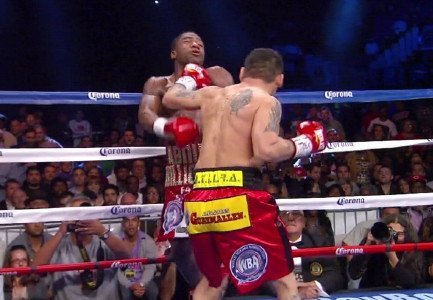 Former three division world champion Adrien Broner (27-1, 22 KO’s) will be in action on May 3rd against former Amir Khan victim Carlos Molina in a scheduled 10 round bout on Showtime pay per view. Broner says he’s got his mind focused on that fight, but he apparently is also targeting a 4th division world title in the light welterweight division.

Broner is interested in going after the WBC or WBA titles that will likely be vacated soon when Danny Garcia moves up in weight to the 147lb division.

“At the end of the day I’m going to do what will make Adrien Broner happy,” Broner said. “I’ll showcase my talents, speed and power on May 3. It’s not a problem at all for me [moving down to 140]. It is my natural weight class. We know that a world title at 140lbs is on the way, but I’ve got to take it one step at a time.”

Broner beating Molina is pretty much a forgone conclusion, because Molina is not in Broner’s class. He’s someone that has been sitting idle since Khan beat him in 2012, and Broner’s management feels he’s perfect for Broner.

If Broner fights for vacant WBA or WBC 140lb titles, he’ll likely be facing someone like Selcuk Aydin, Mauricio Herrera or Thomas Dulorme. Broner will likely lose to Herrera and Dulorme, but Aydin is definitely a beatable opponent for him. If Broner can’t win a title in the light welterweight division then he’s going to need to move back down in weight to 135 to continue campaigning as a lightweight like he did in the past.

“I’m still getting a heck of a check May 3, I don’t care that I’m on Maidana’s undercard, side-card or over-card. If you expect a humbled Adrien Broner you’ll find the same Broner. I’m still fun, flashy, fly.”
Broner will continue to get big paydays until he gets taken apart by a 140lb contender. At that point his paydays will likely drop off.