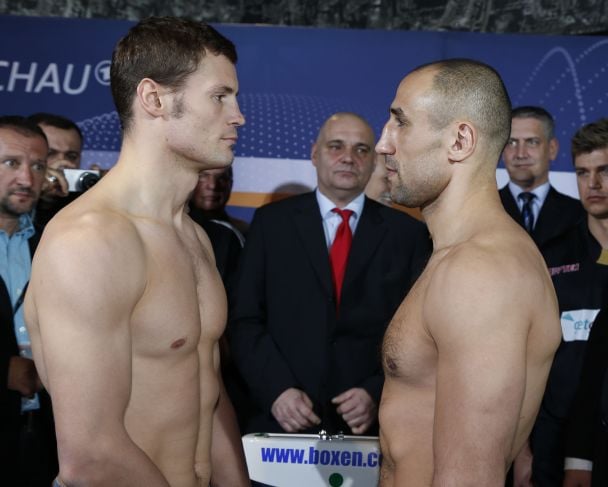 At this point there are major questions about whether Abraham has enough left in the tank to beat Stieglitz – or any good super middleweight – because he doesn’t throw enough punches, and he’s small for the 168 lb division. Abraham bounced back from his loss to Stieglitz by beating Willbeforce Shihepo and Giovanni De Carolis, but he didn’t look good in the Shihepo fight. Abraham was beaten to the punch all night by Shihepo, and he appeared to win all of three rounds. It was hard to see what the judges were looking at to give Abraham the win unless they had the names of the two fighters mixed up on their scorecards because Abraham fought well enough to lose 9 rounds to 3.

Stieglitz is still the WBO champion, but he’s not looked great either lately in beating little known fighters named Yuzo Kiyota and Isaac Ekpo. Stieglitz probably won’t last long as the WBO champion even if he beats Abraham. I suspect he’ll beat Abraham again, because he already created the blueprint in how to beat him last year simply by being busy each round. Abraham will go into his cocoon as long as Stielgitz throws punches. But once Stieglitz gets past Abraham, he’s going to eventually have to fight a good contender like James DeGale or George Groves, and it’s unlikely that Stieglitz will beat either of those guys, unless it’s by a controversial decision.

Stieglitz has had the WBO title for many years off and on, but he’s never been anything more than the same fighter that fighter that Librado Andrade easily beat in 2008. Stieglitz has gone all those years without fighting anyone good other than Abraham, who was already exposed by the top 168 lb fighters in the Super Six tournament. It would have been nice to see how Stieglitz would have done against the likes of Andre Ward, Mikkel Kessler, Lucian Bute and Carl Froch during the past 7 years, but he never fought any of them for some reason.