By Michael Collins: Amir Khan (27-3, 19 KO’s) still is under the impression that he lost to WBC light welterweight champion Danny Garcia last July by getting hurt by a lucky punch thrown by the 24-year-old Garcia. Khan thinks he would have continued to dominate him like he’d done in the first two rounds had he not got hit by that big left hook shot that connected to his neck in the 3rd round.

Khan is now saying that he was having more problems with his last opponent 5’6” lightweight Carlos Molina than he was with Garcia.

Khan was dominating Garcia pretty easily in the 1st round, but in the 2nd round, Khan began to get hit with some hard left hooks from Garcia, and you could tell that Khan was going to have problems in this fight unless he got to Garcia to take him out. Garcia was hitting Khan a lot more regularly than Khan’s other opponents Marcos Maidana and Lamont Peterson early. 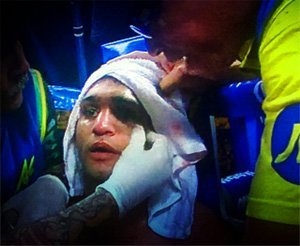 by Geoffrey Ciani, photos by Tom Casino / Showtime – Amir Khan (27-3, 19 KOs) ended a two fight losing streak when he impressively defeated an overmatched Carlos Molina (17-1-1, 7 KOs) last night in Los Angeles. This marked the first time Khan was paired up with new head trainer Virgil Hunter, who is best known for his long term working relationship with rising pound-for-pound superstar Andre Ward. The new team made a good impression in their first effort together, with Khan in complete control of the action that ultimately came to an end when Molina’s corner stopped the contest after the tenth.

Even though Khan and Hunter have only worked together eight weeks, Hunter already seemed to have a visible impact on Khan’s performance. Amir was very patient in the early going and was measured in his approach, especially when it came to attacking. Everything for Khan started with his jab, and this helped create openings where he could unleash short three and four punch combinations that possessed a nice blend of speed and precision. He would throw a short series of shots, reposition himself, throw another combination, and then calmly take a stroll to establish new perspective, resetting the action where he could resume controlling the range to his liking. As Showtime commentator Paulie Malignaggi noted, “There he goes again, Khan is taking a walk”. Amir was composed. By Marcus Richardson: Amir Khan (26-3, 18 KO’s) is limping into his fight tomorrow night against Carlos Molina still licking his wounds from his last two fights against Lamont Peterson and Danny Garcia. Khan lost both of those fights and looked like a fighter that didn’t have the talent to fight at the top level. Khan has now dumped his trainer Freddie Roach and replaced him with Virgil Hunter. Khan thinks that Hunter can turn his career around, and lead him to another world title.

By Michael Collins:  Carlos Molina (17-0, 7 KO’s) thinks Amir Khan (26-3, 18 KO’s) is just talking nonsense when he says he’s going to be fighting under control in a more conservative non-risk taking manner from now on due to the changes he’s made with his fighting style from what he’s learned from new trainer Virgil Hunter. Molina isn’t buying it. He believes Khan will almost immediately revert back to his old style of fighting as soon as he starts getting hit on Saturday when Molina and Khan fight on Showtime at the Sport Arena in Los Angeles, California.

Molina said this as quoted by thesun.co.uk “Khan is going to come out and be defensive in the first part of the round but once I put on the pressure and start landing my punches, he is going to go back to the same old mold. It will be the same old Amir Khan as we’ve seen in his last few fights.”

I tend to agree with Molina on this. It’s really hard for a fighter to change his fighting style when he’s been fighting in the same manner his entire amateur and pro career like Khan has.

By Michael Collins: Former IBF/WBA light welterweight champion Amir Khan (26-3, 18 KO’s) plans on fighting with a lot more self-control when he steps inside the ring on Saturday night against unbeaten Carlos Molina (17-0, 7 KO’s) in Los Angeles, California. Khan knows he can’t afford to lose another fight after losing his last two, so he’s going to be looking to fight a completely disciplined fight where he takes zero changes of getting hurt.

Khan said to thesun.co.uk “It’s all about minimum risk. I will beat up my opponent until they quit. I don’t have to go in there and knock them out. I do that I could start making mistakes and maybe get caught.”

It sounds like Khan is going to focus on throwing a lot of jabs and single power shots instead of the flashy combinations that he liked to throw in the past to try and KO his opponents and impress the crowds. That could work for him but Khan would still be presented with opponents that will walk through his guard to get in close enough to work him over in the same way that Lamont Peterson did.

That’s going to be a problem for Khan because he’ll either be forced to run, shove, hold or fight. We found out already that Khan can’t run for 12 rounds, so he won’t be able to use that for a long fight. Khan also can’t shove because most referees won’t put up with that and will warn Khan and then likely take points off.