Ward said on his twitter “Don’t blink because that fight shouldn’t last long. Easy Work!! Easy!! Like Too Easy!! Not about underestimating…but I can’t help what I see on film.”

By J.D: February 16th at the Boardwalk Hall Atlantic City will see Gavin ‘The Rock’ Rees (37-1-1 18 ko’s) lock horns with WBC Lightweight Champion Adrien ‘The Problem’ Broner (25-0-0 21 ko’s).
Rees has been given little chance by many of upsetting the odds, but as a former world champion at Light Welterweight and the current European and most recently crowned British Champion of the lightweight division has he perhaps been written off too soon as just another learning curve for the highly touted Broner?

By Michael Collins: You’ve got to feel for #2 WBA, #5 WBO, #15 WBC, Gavin Rees (37-1-1, 18 KO’s) right now because he’s someone that is going to demolished this Saturday night against WBC lightweight champion Adrien Broner (25-0, 21 KO’s) unless Rees can come up with a big knockout punch to win. Other than a winning by a knockout, Rees simply doesn’t have the skills to compete against the faster and better skilled Broner.

Rees is at a disadvantage in every sense that you could think of for this fight, and really thing he can try to do is go out there and look for a knockout. I’m hoping that Rees’ trainer has told him this because if he goes into the fight on Saturday looking to out-box Broner at the Boardwalk Hall in Atlantic City, New Jersey, then Rees is going to get knocked out quick.

By Michael Collins: Former WBA light welterweight champion Gavin Rees (37-1-1, 18 KO’s) figured he’d be an underdog in his fight against WBC lightweight champion Adrien Broner (25-0, 21 KO’s) on February 16th, but Rees only now is finding out how much of an underdog he is with some betting agencies. Rees is reportedly an underdog 16-1 to 80-1, and he thinks the bigger numbers are just way too high given his experience and talent.

Rees said to thesun.co.uk “I understand Broner being a firm favorite, but I can’t believe my ability is being treated with such contempt. To regard me as an 80-1 chance is simply absurd. Do they think I’m some wet behind the ears novice?…I’m going to pull off an upset.”

Are 80-1 odds too high for this fight? I really don’t have any problems with those kinds of odds, and even if it was 100-1, I think those are a lot more realistic than 16-1 odds or whatever odds that Rees feels should be for this fight. Rees is just so far out of his league in this fight that it’s just not even funny.

By Michael Collins: Gavin Rees (37-1-1, 18 KO’s) is going to have to dramatically alter his normal fighting style next month if he doesn’t want to get bludgeoned into submission within the first three rounds of the fight against WBC lightweight champion Adrien Broner (25-0, 22 KO’s) in their fight at the Boardwalk Hall in Atlantic City, New Jersey. The reason for this is because Rees is a brawler 100 percent and he doesn’t focus too much attention on his defense as he plods in to slug against his opposition. 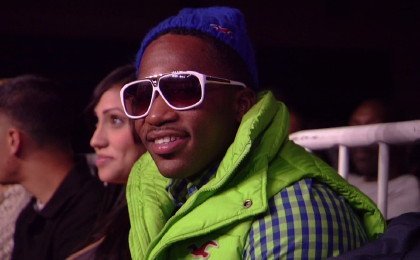 Oscar de la Hoya Thank you very much. We’re extremely, extremely excited to once again return back to Atlantic City where first and foremost we were able to raise a big amount of money that went towards the Boys and Girls Clubs there in Atlantic City.

In our last outing with Adrien Broner, with Banks, also with Seth Mitchell, so it was an exciting, exciting event and a very successful event in terms of giving back to Atlantic City.

The main event, as you know Adrien Broner vs. Gavin Rees will be at WBC Lightweight World Title fight and we also have the co-main events, which will be a 12 round, NABO and WBC Intercontinental Heavyweight Championship fight, which will feature Johnathon Banks vs. Seth Mitchell. This event is being promoted by Golden Boy Promotions and sponsored by Caesars Atlantic City, Corona and AT&T.

We are very pleased to be televising this event live on HBO World Championship Boxing beginning at 10:00 p.m. eastern time and the tickets are priced relatively cheap, with ringside being at $200, going down to $150 and you can watch this incredible event for only $25.

By Michael Collins: WBC lightweight champion Adrien Broner (25-0, 21 KO’s) has got a fight against an over-matched opponent Gavin Rees (37-1-1, 18 KO’s) that he’ll be taking care of in quick fashion on February 16th in Atlantic City, New Jersey. Broner recognizes that he has easy mark on his hands in this fight and he plans on getting the Brit out fast as possible instead of letting hang around needlessly.