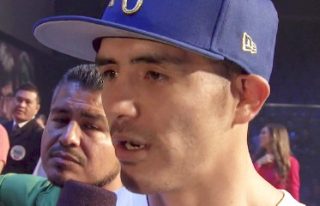 After his comprehensive stoppage defeat at the hands of WBO welterweight champion, Tim Bradley, last night, Brandon Rios publicly called time on his career, insisting he just couldn’t ‘pull the trigger,’ and shrugged off the loss with a customary, ‘f*** it!’

Rios had tried in the build up to suggest he wasn’t done yet, and that he had plenty left in the tank, yet it became evident quickly that 10 frustrating months out of the ring had helped kill any desire ‘Bam Bam’ had left, and he had just been paying lip-service with comments about dragging Bradley into a war. 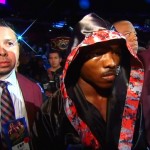 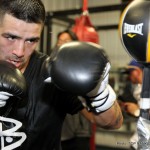 Brandon Rios came in slightly over and looked gaunt at yesterday’s weight-in for his welterweight showdown with WBO champion, Tim Bradley tonight in Vegas, taking the marginal extra weight off after visiting the bathroom.

Rios weighed in at 147.2 lbs, repeating problems on the scales he has had previously in his career when down at 135, notably against Richar Abril and Britain’s John Murray. 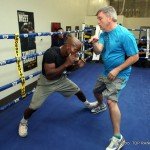 Saturday’s HBO World Championship Boxing telecast begins at 9:30 p.m. (ET/PT). The main event features a matchup of welterweights Timothy Bradley Jr. and Brandon Rios in a scheduled 12-round fight. The telecast kicks off with a featherweight title fight between Vasyl Lomachenko and Romulo Koasicha.

One day away from what many expect to be the Fight of the Year, between two-division world champion TIMOTHY “Desert Storm” BRADLEY JR. and former world champion BRANDON “Bam Bam” RIOS, Rios’ trainer ROBERT GARCIA has heard enough about TEDDY ATLAS, Bradley’s new trainer, and how they will control the fight. 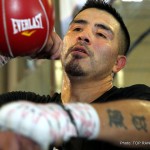 Tim Bradley will walk in as favourite with the oddsmakers when he defends his WBO welterweight title against Brandon Rios on Saturday night in Las Vegas, a fact that doesn’t bother the challenger, who alluded to the odds as meaningless – or in his own choice phrasing – as ‘bulls***.’

Rios hasn’t boxed since he destroyed old foe, Mike Alvarado, way back in January, in what was their third fight, although the Robert Garcia trained fighter feels that not only is he being underestimated against Bradley, he isn’t getting the credit he feels he deserves, and still won’t even if he pulls off the win, as was the case against Alvarado, who clearly turned up ‘out of sorts’ that night. 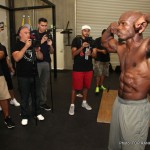 The 32-year-old star has claimed he is a much improved fighter since joining forces with Mike Tyson’s one-time cornerman and that he is unfazed at anything the relentless Rios will throw at him. 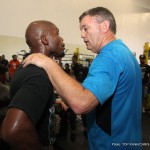 Timothy “Desert Storm” Bradley steps in the ring with “Bam Bam” Brandon Rios Saturday night live on HBO from Las Vegas at the Thomas & Mack Center. The hype or lack of hype heading into fight week is really no surprise. After all Floyd Mayweather just fought in sin city two months ago and in two weeks time the Mandalay Bay hosts Canelo vs. Cotto.

With both men hailing from California it would’ve been a nice fit at The Forum, its original spot. Unfortunately a miscommunication occurred and the end result is a pretty decent scrap in the wrong venue. The fight itself isn’t that great of a matchup at welterweight. A few years back it may have been seen as a showcase. That’s not to say this scribe won’t be excited once the bell rings, it’s just not an event the public demanded.