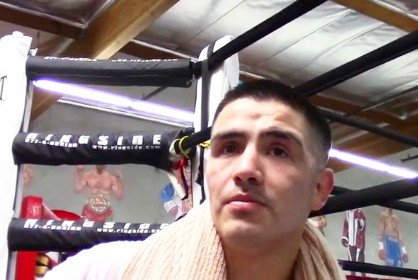 After everything seemed to be on course for IBF welterweight champion Kell Brook to be defending his title against Brandon Rios in London later this year in London, Rios’ trainer Robert Garcia has spoken to fighthype.com to suggest that the fight could now be off.

As recently as a fortnight ago, Garcia told the channel he was confident the fight was a “go” and that earlier contractual obstacles over the type of gloves to be used and the money on the table had been ironed out, after Rios’ manager Cameron Dunkin had held talks with Brook’s team, including promoter Eddie Hearn.

However, as is often the case in boxing, things have changed rapidly – a rematch clause wanted by Brook appears to be the sticking point, and as far as Garcia sees it, Brandon has been left in the lurch;

“(We are) Very, very frustrated. Especially Brandon – Brandon’s the one that has to fight and stay active – and them to be bulls******* him like that?”

“I just talked to Cameron (Dunkin – Rios’ manager) earlier today and he said that there’s nothing, they have nothing for him. And that not only upsets Brandon, the fighter, the one who needs to get back in the ring – but myself, Cameron Dunkin. We’re all not happy.”

“After Brandon’s performance in January against Alvarado, he looked so good. He looked so good he should have been back in the ring by May – latest, June. Bob Arum promised him, he promised he’d be fighting in June. We’re now in July and we still have no date, nothing for Brandon.”

“We were hoping the Kell Brook fight happened but right now it looks like that’s not even gonna happen.”

Arum recently told the media the option existed for Rios to fight on September 12th against Brook in London, or he could fight a fortnight later on a Top Rank show – against “somebody else.”

Yet this new dispute means it could likely be the latter option Rios ends up pursuing.

Garcia meanwhile insists that Rios was also ready and available to be the man facing Tim Bradley last week in place of Jessie Vargas, and is frustrated at the opportunities seemingly continuing to pass his fighter by in the wake of his dominant performance against Alvarado last time out.

“I hear they are talking about Bradley fighting Sadam Ali (next), so why don’t they mention Brandon? I don’t understand and it’s not good for us.”

“(But) I will just let Cameron Dunkin do his work.”