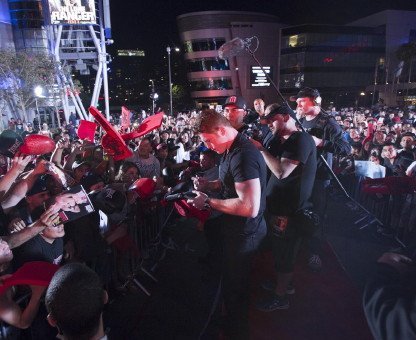 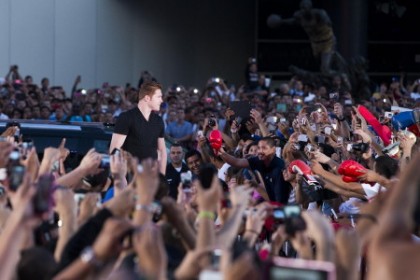 Schaefer thinks the popularity that the red-haired Mexican fighter now has will possibly catapult him and Floyd Mayweather Jr. into breaking the 6-year pay per view record of 2.4 million buys set by Mayweather and Oscar De La Hoya in 2007. (Photo credit: Esther Lin/Showtime) If the inexperienced WBA/WBC junior middleweight champion Saul “Canelo’ Alvarez (42-0-1, 30 KO’s) is to have any chance of winning on September 14th in his fight against Floyd Mayweather Jr. (44-0, 26 KO’s), Canelo is going to have to find a way to neutralize Mayweather’s huge speed advantage over him. Without doing that, Canelo doesn’t have prayer in this fight.

Mayweather is a lot faster than Canelo’s last opponent Austin Trout, and Canelo had problems with Trout’s speed and defense. That fight was very, very close and you ignore the judging for that fight, because those scores didn’t reflect what happened in the ring. (Photo credit: Tom Casino/Showtime) Oscar De La Hoya thinks the September 14th match-up between Golden Boy promoted Saul “Canelo” Alvarez and Floyd Mayweather Jr. has a good possibility of breaking the pay per view record set between himself and Mayweather many years ago in 2007.

De La Hoya sees the Mayweather-Canelo fight being on that magnitude due to Canelo’s huge popularity in addition to Mayweather’s huge fan base. De La Hoya feels the mix of the two will create a huge demand for this fight on PPV come September 14th. Floyd Mayweather Jr. (44-0, 26 KO’s) thinks WBA/WBC junior middleweight champion Saul “Canelo” Alvarez (42-0-1, 30 KO’s) will be looking to strip away a significant portion of his fan base by beating him on September 14th in what will be the first time the 22-year-old Canelo has headlined a pay per view event on his own.

Mayweather doesn’t intend on letting the red-haired Mexican fighter do that to him, and he’s focused on using his vast experience to come up with a plan to beat him when they face each other at the MGM Grand in Las Vegas, Nevada.