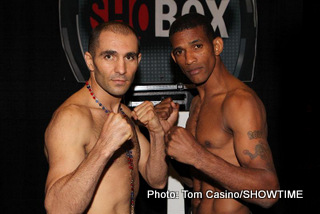 In the ShoBox main event at Chumash, undefeated Art Hovhannisyan (14-0-2, 8 KOs), of Glendale, Calif., makes his first start in 11 months when he faces former World Boxing Association (WBA) lightweight champion Miguel Acosta (29-5-2, 23 KOs), of Caracas, Venezuela, in a 10-round bout with a contracted weight of 134 pounds.

It is Hovhannisyan’s second consecutive fight against a former world champion. In his last outing on Aug. 5, 2011, at Chumash, he fought to a fourth-round technical draw with ex-International Boxing Federation (IBF) featherweight champion Cristobal Cruz.

Promising unbeaten Roman Morales (10-0, 6 KOs), of San Ardo, Calif., takes on Alexis Santiago (11-2-1 5 KOs), of Las Vegas by way of Phoenix, Ariz., in an eight-round super bantamweight bout in the co-feature. It is the ShoBox debut for both youngsters.

Tickets for an event presented by Gary Shaw Productions in association with Thompson Boxing Promotions are priced at $35, $45, $55, $70, and $85 and are on sale at Chumash Resort Casino Box office or online at www.startickets.com.

What the fighters said Thursday:

“In my last fight I made a mistake. I played around too much and then the fight was called because of an accidental headbutt. I had a great training camp and I’m 100 percent ready for tomorrow night.

“My best fighting weight is 130, but I couldn’t turn down an offer to fight somebody like this. It was a risk worth taking. But I’m always willing to fight anybody.

“Acosta is known for his punching power, but I wouldn’t be surprised if he tried to move on me, especially for at least the first couple rounds.’’

“I definitely feel I am good enough to fight for and win another world title. I’m looking at this fight as a measure for me to see exactly where I’m at.

“I’ve been in with some really good fighters. I had things going my way against (Brandon) Rios before I ran out of gas.

“Both of us need to win tomorrow, so it will be a great fight. Physically and mentally, I’m ready. My opponent is a good fighter, but this will be a real test for him. I came to the United States to establish myself; now I can re-establish myself with a big win on Friday.’’

“I’m relaxed and ready to go. I like to apply pressure but I’ve been working hard on my jab in the gym. I’m in great shape and have been sparring a lot. I’ve never gone eight rounds, but I’m not concerned about the distance.

“This is really a great opportunity. I know that if I win and look good that could mean more TV fights for me. This guy has more ring experience and is a step-in class, but I’m ready. I’m trying to get to the top, one step at a time, and this is the next step.’’

“This is my third fight since I started working with Roger Mayweather about nine months ago. Moving to Las Vegas from Phoenix has made a huge difference in training. Before I would go to the gym for 30-45 minutes and basically train myself. Since I’ve been in Vegas, I’ve been training really hard and sometimes I stay at the gym for three or four hours. I’m totally dedicated.

“I really feel for the first time that I am coming into my own. Roger has really been working with me on setting down my punches.

“I’ve always felt that I knew how to win and now I’m facing a good young opponent like me. I feel this is going to be a breakout fight for me. I’m confident and ready. I can’t wait for this fight on SHOWTIME.’’