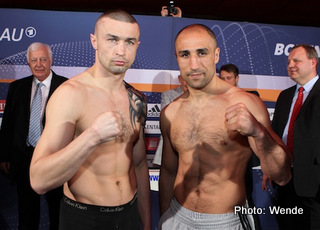 Former European Super-Middleweight Champion Piotr Wilczewski (30-2, 10 KOs) is the final obstacle between Arthur Abraham (33-3, 27 KOs) and another world title shot. The two fighters battle it out in Kiel, Germany on Saturday night. Here is a quotes wrap-up from both men..

WILCZEWSKI: “I did three weeks of intense sparring. I feel ready to get inside the ring. Come Saturday night, I will be perfectly regenerated and a hundred percent ready.”

ABRAHAM: “I have sweated a lot. It will not be in vain. I am in great shape and I will win.”

ABRAHAM: “Wilczewski seems to be a rugged and tough guy. By his record, you can tell that he has some experience. He was already the European champion at super-middleweight. I will not underestimate him but not overestimate him either.”

WILCZEWSKI: “Abraham was a world champion at middleweight and is still a competitive, experienced sportsman. In addition, he can deliver this one-punch K.O. Arthur Abraham is still a dangerous opponent who wants to win as much as I do.”

WILCZEWSKI: “I do not know if size and reach is really an advantage to me. Abraham has already fought and beaten people taller than me. Theoretically, you could say that my stamina is going to be an advantage but you can talk as much as you want before a fight. However, you know what: A leopard cannot change its spots. Abraham is not going to fight any different. He might try to adapt but those adjustments could merely be more than 10 percent at best. Still, the truth is going to be told on March 31.”

ABRAHAM: “I got something on my mind how I can box and beat him. However, I will not reveal anything about my strategy. Everybody will find out on Saturday.”

WILCZEWSKI: “As long as the fight is going the distance and the judges are objective, I will be the winner.”

ABRAHAM: “I am going to beat Wilczewski and fulfill my biggest wish, which is getting another chance to win a world title. This time I will be ready for it!”

Arthur Abraham and Piotr Wilczewski battle it out on Saturday

Former European Super-Middleweight Champion Piotr Wilczewski (30-2, 10 KOs) missed today´s public work-out in Kiel. Four days ahead of his showdown with King Arthur Abraham (33-3, 27 KOs), the Polish fighter was stuck at Munich airport. His connecting flight was cancelled due to nationwide airport strikes in Germany. “I will be there for Wednesday´s press conference,” he said. “This doesn’t bother me. The most important thing is that I will be in the ring on time. This little airport strike cannot keep me from beating Abraham on Saturday.”

King Arthur looked in brilliant shape during today´s public session with coach Ulli Wegner. “I don´t have to see Wilczewski today,” he said. “I have seen enough tapes of him together with my coach. He is a strong opponent. I will not underestimate him. But I will be victorious on Saturday night.”

In the co-featured main event, European Light Heavyweight Champion Eduard Gutknecht (23-1, 9 KOs) will defend his title against Tony Averlant (17-5-2, 4 KOs) from France. “I am in good shape,” Gutknecht said. “Averlant wants my title but he will not get it.”