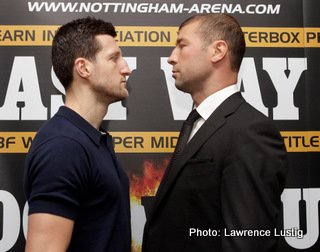 Over 5,000 tickets sold in 48 hours for Nottingham World title clash

Carl Froch’s IBF World super middleweight title fight with Lucian Bute at the Capital FM Arena Nottingham on May 26 is racing to a sell-out after over 5,000 tickets were sold in the first 48 hours.

The Cobra aims to become a three-time World Champion when he faces the unbeaten Canadian, who is making the tenth defence of his title. Froch is fighting in the UK for the first time since beat Andre Dirrell in the Super Six opener at the same Arena in October 2009.

Tickets went on sale at 2pm on Monday when Froch and Bute came face-to-face at a press conference at the venue, and the demand for the hottest ticket in town was instant, with a huge queue forming at the Arena, and the phones and website were hot with fight fans snapping up the seats..

Inside the first two days over 5,000 tickets for the fight in the 9,000 seat Arena were sold, and promoter Eddie Hearn expects the fight to be sold out in the next few days.

“The response has been phenomenal but we always knew it would be,” said Hearn. “Carl’s loyal fans have followed him all over the World in the last few years so with The Cobra coming back home it was always going to be a big seller. If you haven’t got your ticket now, you need to move fast as this could be sold out by the weekend.”

VIP packages priced at £300 are available exclusively from Matchroom Sport at www.matchroomboxing.com and 01277 359900.

Next post: Bob Arum Says Manny Pacquiao Will Not Retire Until 2013; Hope Yet For Mayweather Super-Fight?