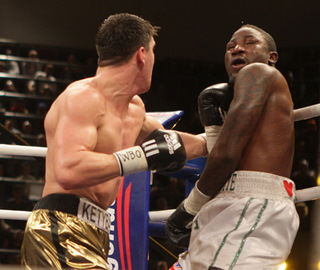 By James Slater: According to Dan Rafael of ESPN.com, the WBO have announced that cruiserweights Marco Huck and Ola Afolabi have reached an agreement for a mandated return meeting, therefore purse bids will not be necessary. The word is the two will meet in Erfurt, Germany on May 5th – the night the massive Mayweather-Cotto card goes down in Las Vegas.

The best fight that could be made in today’s bubbling 200-pound weight division in my opinion (although there are a number of potentially great fights that could be made there; most of them involving the always-fun-to-watch “Kap’n Huck”), Huck-Afolabi II will see a return of the exciting December 2009 clash the two rivals had. Huck survived a torrid 5th-round to win that one via reasonably comfortable 12-round UD (115-113 twice and 116-112), yet British-born Afolabi says he was too lazy and reluctant to throw punches in the fight – a mistake he says will not be made again.

27-year-old Huck, 34-2(25) was last seen rumbling with a proven heavyweight in Alexander Povetkin; now he must again get past the slick, well-travelled, gym-experienced “Kryptonite.” Fans can get ready for a tough fight; for both guys..

32-year-old Afolabi, 19-2-3(9) won the interim WBO title with an impressively dominant 5th-round retirement win over former WBA interim champ Valery Brudov back on March 3rd, on the Wladimir Klitschko-Jean Marc Mormeck card. That win marked Afolabi’s fifth in a row since the loss to Huck, and it must be said that Ola showed more venom in his win over Brudov. Before that, in icing British veteran Terry Dunstan inside a round, “Kryptonite” really lived up to his nickname; scoring a KO Of The Year candidate.

It’s always hard to pick against Huck, at 200-pounds anyway (he’s only lost once at the weight, when he was too inexperienced for Steve “U.S.S” Cunningham back in Dec. 2007), but I have a feeling a motivated, more aggressive Afolabi might just grab the belt on May 5th. An exciting fight can be expected either way. Huck wants to dominate the division he feels most comfortable at (although if the right fight comes up, don’t be surprised if Marco goes back up to rumble with one of the big boys), while Afolabi vows to throw a whole lot more leather in what could be his last big chance.

Afolabi is a bag of tricks (a result of his sparring countless top names in various gyms), with added venom in his shots and more desire he could be the best in the world at the weight. We will find out on May 5th.

A distance fight looks likely, but both guys can hit hard. I think Afolabi will find a way to win this time.