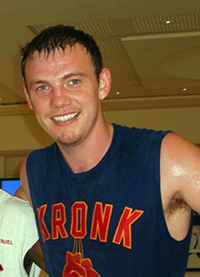 The hungry Kronk fighter is presently listed in the world rankings as WBC #4, WBA #2 and WBO #2 and following a 13 fight winning streak feels he has paid his dues to challenge for a world title on June 16.

Then during February 2012 Team Chavez changed their minds on Lee as an opponent, the reason being they were reluctant for Chavez Jr. to fight the Kronk fighter because of his southpaw style..

Team Lee is clear they want the fight and think the fight makes good sporting and business sense for all parties. They feel for a world champion with nearly 50 fights not wanting to fight a challenger because of his southpaw style is a pretty lame excuse at this level of the sport.

Lee commented “I would relish the opportunity to fight Julio Cesar Chavez Jr. for the WBC title on June 16. I’m ready and available, let’s make the fight. It would be a tough fight but I believe I have the skills to beat him and end his reign as champion. The Irish and Mexican people like a good fight, so let’s get it on.”

The Chavez Jr v Zbik world title bout on June 4, 2011 successfully drew 1.5 million viewers on HBO and with over 40 million people in the US of Irish descent a Chavez Jr v Lee title bout has the potential to boost these viewing figures significantly and generate substantial revenue for fighters, promoters and broadcasters.

Lee’s manager and trainer Emanuel Steward commented “Andy has established himself has an entertaining fighter in America and Europe. I think a fight between Andy and Julio would be a great fight; they are two young fighters burning with ambition and have a track record of being in exciting fights.

Andy is the most prominent and visible middleweight contender resident in the United States at this time; it makes good sporting and business sense for HBO and promoters to make the fight between Andy and Julio.”

Team Lee is confident that a deal can be made with Top Rank, Team Chavez and HBO soon if Top Rank want to re-engage in discussions. There are no other opponents out there for Chavez Jr. to fight that have the credentials that Andy Lee brings to the table.

Lee commented “I have been patiently waiting for my opportunity and now that the dust has settle in the first quarter of 2012 there should be different options emerging for me to challenge for a world title. I strongly feel I deserve my shot. I have worked hard in the last 6 years and with dedication and perseverance got myself positioned as a legitimate world title contender.

I now have my sights fixed on fighting not just Julio Cesar Chavez Jr., but also other champions such as Sergio Martinez, Daniel Geale or Felix Sturm. I am gunning for all of them. I am looking to square off with any one of those guys in the ring within the next three to six months.

I am a prize-fighter that is what I do for a living and why I came to America. I am driven by the ambition to be successful in my career and become world champion. I take that task very seriously; I have dedicated my life to boxing and made a lot of sacrifices.”

Emanuel Steward believes his fighter has all the tools to become world champion.

Steward commented “Andy came to the Kronk Gym, Detroit six years ago following a successful amateur career, an U19 World Silver Medallist in 2002 and Athens Olympian in 2004. He has had almost 30 fights as a pro, he is at the top of the world rankings and at the age of 27 he is in the prime of his life.

Andy has earned his place to challenge for a world title. He is an exciting fighter who can box, fight in the trenches and can bang with either hand. We are primed and ready to fight for a world title when the opportunity arises.”

Martinez from Buenos Aires, Argentina turned 37 years old on February 21, 2012 and despite the years on the clock is a phenomenal athlete. The Argentine is a slick and skilful counterpuncher who can punch effectively and has impressively produced 4 KO victories in his last 4 fights against Paul Williams, Serhiy Dzinziruk, Darren Barker and Matthew Macklin.

Daniel Geale (27w, 1l, 15 kos) became IBF Champion on May 7, 2011 with a split points decision win over Germany’s Sebastian Sylvester and since then has successful defended his title twice, most recently on March 7 against Osumanu Adama. Geale from New South Wales, Australia is a very skilful technical boxer, with a good work ethic, but limited power.

Geale handlers recently expressed it is their goal to bring Geale to America this year. Gary Shaw, Geale’s US promoter could make a straightforward match with Lee and for the fight to be broadcast by HBO Boxing or Showtime.

Lee fancies his chances in a fight against the 31 year old Geale and feels he has the strength, power and ring craft to beat him.

Sturm has a great jab, good defence and is a strategic thinking fighter who knows how to devise a plan to win a fight. Not a power puncher. He is an experience fighter and now promotes himself to sell-out venues in Germany.

With some recent lack lustre defences time is running out for Sturm and it is only a matter of time before he gets beaten. Sturm is a faded fighter, covering up in most of the rounds and fighting only in spurts of action. Sturm’s next fight will be on April 13, 2012 against Sebastian Zbik.

Lee is no stranger to Germany having fought there on the Klitschko Shows several times and would be up for travelling to Germany to fight Sturm or for the German to come to Ireland or America for the fight.

Andy Lee, the Irish Kronk middleweight star is determined to land himself a world title fight in the near future.

Next post: Floyd Mayweather Jr. Donates to Save a Life

Previous post: Boxer Danny O’Connor Flying the Flag for Boston Boxing With the Help and Support of his Friends the Dropkick Murphys