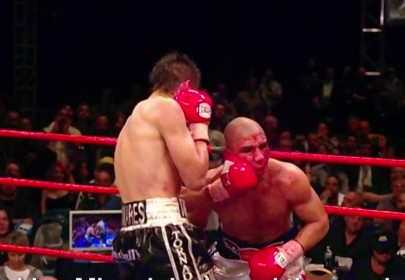 By Paul Strauss: Robert Garcia, the current trainer of Antonio Margarito, sides with his fighter’s version of the warrior. In doing so, he not only supports his charge, but also takes a not so subtle shot at what he portrays as Miguel Cotto’s lack of courage. Garcia grants that Miguel once had it (warrior’s courage), but no longer does. He feels Miguel’s words are more those of a businessman, and not of someone who has the true warrior spirit.

At the same time, it is apparent he is once again trying to alibi for his failure to protect Antonio from the brutal, and possibly permanent damage done to him in his fight against Manny Pacquiao. The overwhelming opinion at the time and now is that Garcia was negligent in not throwing in the towel. Often times fighters have to be protected from themselves, and Garcia failed to do so in that fight. The question he might ask himself is, “Without a fractured orbital bone, would Antonio be any less courageous?”

Garcia attempts to compare the warrior spirit to a courageous fireman, who willingly places himself in harm’s way, risking tremendous physical danger, possibly even death, so that he can rescue someone he doesn’t even know. No argument there. But, is Garcia’s depiction an accurrate description of what Antonio is saying? Probably not. At least Miguel Cotto thinks not. He believes Margarito is speaking foolishness when he says he’s willing to die in the ring before he would quit. Cotto dismisses such talk as nonsense, and a childess attempt at strutting bravado. Cotto wisely points out the reality of the situation, which includes a duty to avoid reckless endangerment of his own safety, because he has responsibilies, not only to himself, but to his family and others. It’s an act of stupidity to risk a premature ending to your career as a professional fighter just so you can live up to someone’s misguided idea of machismo. Ask Israel Vasquez what he thinks about it.

At risk of putting words in Miguel’s mouth, let’s carry the comparison a little further. In Miguel’s mind, what Antonio Margarito proposes is not truly a situation where he risks his own safety to save someone. Rather, in Cotto’s mind, Tony/The Express Train is foolishly implying that he is willing to highball into a burning building, not to save someone, but to prove to himself and the world that he’s not afraid of fire! Cotto correctly insinuates that that is not true courage. The babble Garcia and Margarito espouse is more of a reckless, exaggerated and immature machismo. Or, if you prefer, a false masculine pride. It starts out early with the young squirt, who gets sucked into taking the double dare. Don’t confuse it with courage on the battlefield either. No, this is more like the hormonal youth, who is willing to commit an act of violence in an attempt to impress the group he wants to join or remain a part.