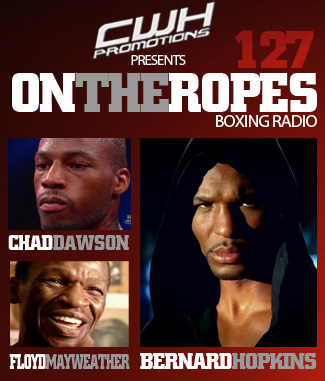 by Jenna J – This week’s 127th edition of On the Ropes Boxing Radio (brought to you by CWH Promotions) features special guests Bernard Hopkins, Floyd Mayweather Senior, Chad Dawson, and Dan Goosen. You can click play on the player to listen.

On the Ropes Boxing Radio is back to bring you the latest and greatest in the world of boxing! Join me Jenna J, the Hostess, along with my amazing Producer and Co-Host Geoffrey Ciani, along with Correspondent heavyweight contender Chauncy Welliver.

Be sure to join us for four exclusive interviews:

Bernard Hopkins:
• Coming off impressive 12 round UD against Jean Pascal to become the oldest fighter to win a major championship
• Is rumored to be facing Chad Dawson in his next contest
• Reigning WBC light heavyweight champion of the world
• Current record stands at 52-5-2 with 32 wins coming by way of knockout
• Will be making his seventh guest appearance “On the Ropes”

Chad Dawson:
• Coming off an impressive 12 round victory against Adrian Diaconu
• Is rumored to be facing Bernard Hopkins in his next contest
• Current record stands at 30-1 with 17 wins coming by way of knockout
• Will be making his third guest appearance “On the Ropes”

Floyd Mayweather Senior:
• Highly regarded boxing trainer
• Father of one of the best pound-for-pound fighters today, Floyd Mayweather Junior
• Had a career record of 28-6-1 with 18 wins coming by way of knockout
• Will be making his tenth guest appearance “On the Ropes”

Dan Goosen:
• President of Goosen/Tutor Promotions
• Will be making his first guest appearance “On the Ropes”