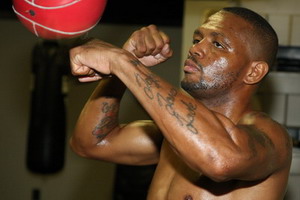 Jacksonville, FL: Former unified lightweight champion Nate Campbell (33-7-1, 25 ko’s) has decided to hang up his gloves after suffering a split decision loss to journeyman Walter Estrada (37-13-1) Saturday night on the Juan Manuel Marquez-Michael Katsidids HBO card in Las Vegas. Campbell got a late start in boxing, turning pro near his 28th birthday in 2000, but shocked the boxing world in 2008 by dethroning the then undefeated Juan “Baby Bull” Diaz in a bullring in CanCun, Mexico to win the IBF, WBO, and WBA lightweight titles. Campbell’s then promoter Don King’s inability to land a meaningful fight following the Diaz upset led to a year layoff and an eventual move to the jr. welterweight division where Campbell had a no contest with world champion Timothy Bradley and a decision loss to “vicious” Victor Ortiz. The always colorful Campbell released the following statement after Saturday’s loss to Estrada:

“First of all, I want to let everyone know that I’m fine. But after thinking about Saturday’s fight, I know it’s time for me to hang it up.. I’ve reached the point where I can still see the openings, but I just can’t get my shots there in time. In this business, a tenth of a second delay is too much. And in no way do I mean any disrespect to Estrada. He came to fight and won the fight fair and square, but I’m not supposed to struggle in fights like this. And if I do struggle in fights like this, then what would that mean for me against a top tier fighter? I didn’t enter this sport to be anyone’s opponent. I entered this sport to become a world champion. I am fortunate that I was able to accomplish that goal. I would have liked to continue on to win titles in other divisions, however when your body tells you that it’s time to go, then it’s time to go. I had hoped that the back rehab I went through after my injury in training camp for the Ortiz fight would have made a difference, however mobility obviously wasn’t my only issue, and the rehab couldnt fix my age. As we get older, things slow down a bit, and the 135 and 140 divisions just dont work well for a 38 year old.

I would really like to publicly thank Golden Boy for still believing in me after the Ortiz fight. It’s no secret that I’ve had many issues with promoters over the years. but if I had one regret in this sport, it’s that I wasn’t with Golden Boy at the time of the Diaz fight. I think the last 3 years would have played out significantly different had I been with them the whole time. Eric, Richard, Oscar, and my old friend Dave Iskowich are truly good people, and were more than fair with me. Hopefully I will continue to work with them in some capacity perhaps with other fighters I manage or in some other way. I actually enjoyed my time with them, and would go so far as to encourage other fighters out there to think long and hard before signing with anyone else. I’ve seen enough bad in this sport to know the good when I see it.

For right now, I’m going to take a little time to reflect on everything, and then begin the next chapter of my life. I’ll still be involved in the sport somehow, through the fighters I manage, and I will also look for opportunities to continue with commentating. I truly enjoyed filling in for Teddy Atlas on ESPN, as well as doing commentary on a few of Roy Jones’ fights, and would like to do more of that in the future. I’ll also now be able to spend more time with my wife and kids, and continue God’s work with the mininstering that I do. I’ve got no complaints. I came into this sport as a nobody at 28 years old, ultimately appeared on NBC, ESPN, Showtime, HBO, and PPV, managed to win 3 world titles in the process, and made a few bucks along the way. Not too shabby for a wise-ass kid from Jacksonville.

On a lighter note, there is still one fight I am going to take. Ten years ago, I met my advisor Terry Trekas in a gym in Tampa, FL, and we almost came to blows over some foolishness. We ultimately became the best of friends, and now we are more like family than anything else. Well for the past 5 years or so, we have had an agreement that after I retire, Terry gets 3 rounds with me. So sometime in the next few months, we will be heading over to Fight Factory in Tampa, so I can hit him in his stomach and watch the smoke come out of his mouth. Then we’ll head over to WingHouse and laugh about it, assuming of course he will be able to eat. It’s all in good fun though. Maybe I’ll even have John David work his corner.

Alot of people played a role in me achieving everything that I did. People like Frank Jiminez, Jimmy Waldrop, Pete Fernandez, and plenty more. The list is way too long for me to write here, so I will be thanking those folks personally.

And lastly, my door is always open to any young fighters who want to know how this game works, and what to look out for. Not being a big-shot amateur, and also being a bit older, I had to do this the hard way, and I learned alot along the way. Anyone who would like any advice or info can hit me up on Facebook or you can reach me through www.onepunch.net. Good luck and God Bless!”