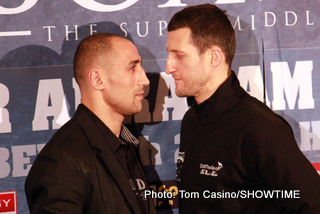 While there was no trash-talking — Froch (26-1, 20 KOs) was very quiet and didn’t want to get into anything beyond answering his questions simply and Abraham (31-1, 25 KOs) was in a more jovial mood but also kept his responses short — the fight itself this Saturday, Nov. 27, on SHOWTIME® (9 p.m. ET/PT, same-day-delay) and live and exclusively in the UK on Primetime Channel 480 on Sky from Hartwall Areena also for the vacant World Boxing Council (WBC) super middleweight title — has the potential to be a classic slugfest from start to finish.

In the second bout of the split-site doubleheader on SHOWTIME, unbeaten Andre Ward (22-0, 13 KOs) will defend his WBA 168-pound crown against Sakio Bika (28-4-2, 19 KOs) live from the Oracle Arena in Oakland, Calif..

What the fighters and their promoters said before the Group Stage 3/WBC title fight on Wednesday: 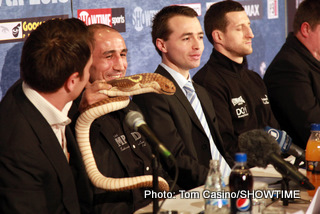 “The first couple of days here have been nice. I’m in a good mood, a comfortable mood. This is a bit cold for me since my coach has had me training in 110 degree temperatures. It is good for the body. I’m well prepared for Saturday night.’’

In response to a question about the size difference and Froch’s comments that he was much bigger, Arthur said: “Inside the ring all that matters is to be mentally stable. It doesn’t matter (about being) bigger or stronger, just clever. The clever fighter always wins.’’

“Right now this is the calm before the storm. Coverage in Finland has been tremendous. Arthur and all of us are touched by the Finnish fans who are rooting for him. Arthur’s training camp has been the camp of his life. This is the fight of his life. He will reclaim the title in his second division.’’

“I’ve been promoting boxing for more than 30 years and I can’t remember the last time I was this excited. I don’t like to make predictions but I’m very confident Arthur will win the belt Saturday night. From what I heard from his trainers he is in the shape of his life and may even have a few surprises that will test how versatile Froch is.’’

“It’s great to be here in Finland. I go into every fight to win. If that means throwing bombs and breaking ribs then, yeah, I’ll do everything I can to win my belt back. I come into the fight with self belief and confidence. I plan to come into the ring and win this belt back. I don’t think it should have ever been taken away in the first place. I predict I’m going to win by any means necessary on Saturday night’’

“This is a sensational fight between two fantastic warriors with big punching power. Froch is here to claim what is rightfully his, the prestigious WBC belt. I’ve said it before and I truly believe it, he is the best super middleweight in the world.”