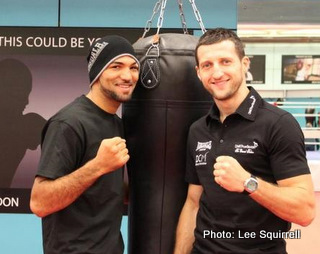 NEW YORK (Nov. 22, 2010) – Following two dominant ShoBox stoppages, Edwin Rodriguez (17-0, 13 KOs) drew the attention of Carl Froch (26-1, 20 KOs) and his trainer Robert McCracken. Just days after an exciting ninth-round TKO over James McGirt Jr. on the Nov. 5 telecast of ShoBox: The New Generation, Froch and McCracken flew Rodriguez across the pond to help them prepare for the Super Six World Boxing Classic clash with Arthur Abraham (31-1, 25 KOs) for the vacant WBC Super Middleweight title on Saturday, Nov. 27, on SHOWTIME® (9 p.m. ET/PT) on same-day-delay from Hartwall Areena in Helsinki, Finland.
Said Froch of the 24-year-old Worcester, Mass. resident, “Rob and?I picked Edwin as we heard he is a great fighter with ambition, which is always important with sparring partners, as it means they try to be successful?during the spar.”

The aggressive Rodriguez studied Abraham’s style to best mimic the German’s ring prowess while sparring with Froch. “I have a tight defense like Abraham and have kept my hands up in the gym so Carl can work on opening Abraham’s defense and get ready for a KO,” said Rodriguez.

After facing the hard-hitting Brit in person, Rodriguez is thoroughly impressed and appreciative of the experience. “This has been a good opportunity for me to train with an elite athlete like Carl. I have seen firsthand that he is a world class fighter. I can’t see how Abraham will beat Carl. Abraham has good defense but Carl has a hard and accurate punch..”

Froch, however, is not the only one leaving a lasting impression. After a workout last week, the former WBC Super Middleweight champion said, “Sparring with Edwin has been brilliant. He is very fast, can punch with both hands and stays there at times like Abraham will [during our fight]. I feel he has far more natural ability and speed than Abraham.”

In the second bout of the split-site doubleheader on SHOWTIME, unbeaten Andre Ward (22-0, 13 KOs) will defend his WBA 168-pound crown against Sakio Bika (28-4-2, 19 KOs) live from the Oracle Arena in Oakland, Calif.

Next post: Schaefer Discusses Who Juan Manuel Marquez May Face After (If) He Gets Past Katsidis