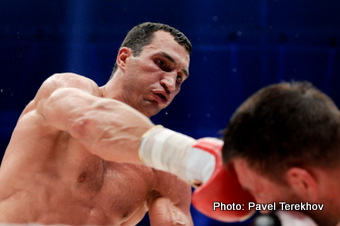 Samuel Peter is 29 years old and #2 ranked in the IBF. After the IBF disqualified Alexander Povetkin for not following its rules, Peter is now the mandatory challenger of Klitschko.

In 2005, Klitschko and Peter met in a dramatic fight in Atlantic City, USA. Klitschko was down three times during the fight but came back strong and nearly knocked out Peter in the 12th round. Klitschko won the fight by unanimous decision.

Wladimir Klitschko: „Peter was one of the toughest fights of my career, he is an extremely hard puncher and has improved a lot in his last fights. I know what to expect on September 11 and I will be well prepared..”

Samuel Peter: „I had to wait a long time for the rematch. Now I will finish what I missed five years ago. This time I am going straight in and take him out. It’s not going to last real long.”

Bernd Bönte, Managing Director of Klitschko Management Group (KMG): „ Klitschko vs. Peter five years ago was one of the most exciting bouts in the last decade. Boxing fans have wanted to see this rematch ever since. We are grateful that we now have an even better and stronger opponent for Wladimir than Povetkin.”

Samuel „The Nigerian Nightmare“ Peter lives in Las Vegas, NV and is currently training in Big Bear, CA with experienced trainer Abel Sanchez. His fight record is 34 fights (27 KOs) with only three losses. Peter was WBC World Heavyweight Champion 2006-2008 before he lost against Vitali Klitschko. In the last 12 months Peter won four fights by KO, his last bout was for the IBF title eliminator against Nagy Aguilera.

Klitschko‘ s record is 54 wins (48 KOs) with three losses. It is his 18th championship fight and he is the longest reigning IBF Champion.

In Germany, the fight will be broadcasted live and exclusively on RTL: