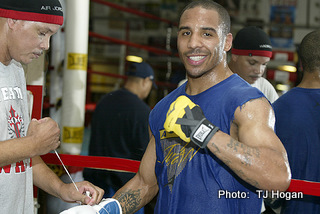 by Jenna J — Click here to listen to the show — As always, this week’s 79th edition of On the Ropes Boxing Radio (featuring Andre Ward, Sugar Ray Phillips, and John David Jackson) will start at its regularly scheduled time, 6:00pm Eastern Time. You can listen live by clicking “play” on the player or enter our chat on the blogtalk message board; you can also call into the show at (646)716-5404.

On the Ropes Boxing Radio is back to bring you the latest and greatest in the world of boxing! Join me Jenna J, the Hostess, along with my amazing Producer and Co-Host, Geoffrey Ciani (aka-Rummy).

• Julio Cesar Chavez beats John Duddy by unanimous decision
• Is Chavez versus Miguel Cotto next?
• Where does John Duddy go from here?

Andre Ward:
• Reigning Super World WBA super middleweight champion
• Recently defeated Allan Green in dominant fashion in round 2 of the Super Six
• Scored a dominant upset victory against tournament favorite Mikkel Kessler in round 1
• Is scheduled to face friend and former Olympic teammate Andre Dirrell in round 3
• Current record stands at 22-0 with 13 wins coming by way of knockout
• Will be making his fourth appearance “On the Ropes”

Sugar Ray Phillips:
• Former professional boxer who once fought Marvelous Marvin Hagler
• Had a career amateur record of 145-6 which included a National Golden Glove championship
• Is a bailiff on the television series “Eye for an Eye”
• Had a career record 15-9 with 4 wins coming by way of knockout
• Will be making his second appearance “On the Ropes”

For more information visit the official OTR website at:
http://www.ontheropesboxingradio.com