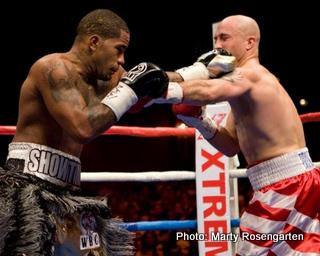 By John G. Thompson – Los Angeles, California – Jesse Brinkley 35-5 (22 KO’s) put on spectacle of determination at the Grand Sierra Resort in Reno, Nevada against Curtis “Showtime” Stevens 21-3, who may have taken his opponent too lightly. Brinkley thoroughly outworked his opponent, winning almost every round, and almost walked away with a twelfth round stoppage. Despite this impressive victory, which now puts him at the number two spot in the IBF rankings, does Brinkley show the kind of talent it would take to dethrone the current IBF Champion Lucian Bute?

In the televised under-card, twenty year old Raymond Serrano 12-0 (6 KO’s) of Philadelphia, PA put on an impressive showing against the thirty-three year old Ronnie Warrior, Jr. 13-3-1of Oklahoma City, OK. Ronnie had been coming off a two-and-a-half year layoff and it showed as Serrano boxed well, stuck and moved, and dominated the fight, earning a unanimous eight round decision.

Curtis Stevens won the first round of the main event, but that may have been the only one. Ringside commentator Teddy Atlas also gave Stevens the eighth round, seemingly out of generosity. Stevens, who had boasted that he would get a fifty-second stoppage, did get Brinkley with some good shots in the first, creating a welt under Jesse’s eye..

Brinkley used his jab in the second round, throwing more punches than Stevens, remaining active and winning the round. This was the case again in the third. In the fourth Stevens attempted to turn up the pressure, though Brinkley wound up getting the better of the exchanges. If the fourth round got the crowd excited, the fifth brought them to their feet. The action in this round continued after the bell, prompting Brinkley’s trainer Peter Manfredo, Sr. (who’s son had won a decision against Matt Vanda in Connecticut earlier this evening) to jump into the ring and push Curtis Stevens away from his fighter into the ropes, even though referee Vic Drakulich had already separated them. This prompted the Nevada State Athletic Commission to remove Manfredo from Brinkley’s corner for the remainder of the fight.

Brinkley did not appear to need his corner man as he landed perhaps his best punch of the night – a straight right, followed by another right – in the sixth round, backing Stevens into the ropes, and knocking him down with a couple more rights. Stevens got up just as the bell ended the round. Throughout the rest of the fight Brinkley simply outworked the man who may not have trained as hard as necessary, Stevens having expected an early knockout victory.

All due respect must be paid to Brinkley for his actions in the twelfth and final round, because although he could have easily cruised to a unanimous decision victory, it looked like he was going for the stoppage. True, Stevens was pressing the action, however, Brinkley did not shy away from the heated exchanges. In fact, with thirty seconds left in the fight, Brinkley caught Stevens with a few good shots, sending him into the ropes. Clearly the ropes were the only thing preventing Stevens from falling out of the ring, and so referee Vic Drakulich correctly ruled a standing eight count. Stevens finished the fight but the decision was unanimously against him.

Jesse Brinkley earned one of his most impressive victories; however, is there anything in this victory to suggest he could come out victorious against the undefeated IBF Champion Lucian Bute? With the other Super Middleweight Titles being tied up in the Super Six Tournament, Bute would be the only real title in Brinkley’s division. Coming off his recent stoppage of the iron-chinned Librado Andrade, Lucian Bute looks almost unbeatable having out-boxed Andrade in their first meeting and out-gunned him in the second. While Brinkley enjoyed a height advantage over Stevens, at 5’10” Brinkley would be the smaller man against the 6’2” natural super middleweight Bute.

Brinkley may have earned a shot at the IBF crown, though perhaps he could do well to ride the popularity boost he earned from this fight as he certainly has some options in the talented super middleweight division. A fight with an exciting fighter like Edison Miranda, or Librado Andrade, or oddly enough the LOSER of the Allen Green vs. Sakio Bika fight so long as it is competitive (being that the winner will be fighting in the Super Six Tournament), or even fellow first season Contender alumni Peter Manfredo, Jr. (though that match-up might present problems for their trainer) could all produce some intriguing match-ups. Either way, Jesse Brinkley’s promoters may want to get a few more paydays out of Jesse before putting him in with the Champ.

Comments? Email me at: BoxingWriterJohn@gmail.com