Both WBO Cruiserweight Champion Victor Emilio Ramirez (15-1, 12 KOs) and challenger Marco “Captain“ Huck (25-1, 20 KOs) are brimming with confidence ahead of their clash at Halle´s Gerry Weber Stadium on Saturday night. “I will win early,” Ramirez predicted during today´s press conference. “Huck is a strong opponent, but I will not allow anyone to take the title away from me. I have worked very hard to become champion and I will take the belt home to Argentina”

Huck would not allow himself to be provoked. “All that matters is a victory,” he stated when asked about his thoughts of knocking Ramirez out. “All my life I have been working to become world champion. I have learned from the loss against Cunningham. This is my second chance. I am a better, a more mature fighter. I have dedicated my whole life to this chance. I will make the most of it on Saturday night.”

Huck will be counting on the ferocious home support of the fans in Halle (Westphalia), which is just ten miles from his home city Bielefeld. “I know the Gerry Weber Stadium from all the big tennis events with the likes of Roger Federer. It has always been my dream to fight here. I will not disappoint my fans.” Also in action will be former WBO Heavyweight Champion Lamon Brewster (35-4, 30 KOs), who takes on Gbenga Oloukun (16-1, 10 KOs). “He is a tough guy with a good record but he better watches out,” Brewster said. 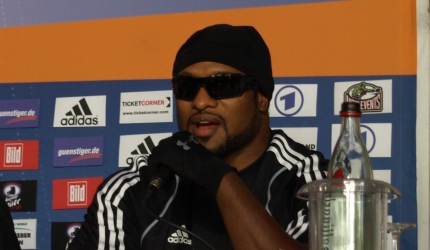 “The first mistake he makes will be his last. I am excited to fight in Halle. I need to get the ring rust off me. I think I will need three fights until I can challenge for the world title again. I am completely healthy and in great shape. I was the last man to beat Wladimir Klitschko and he was the last man to beat me so we should see who wins a third time. Saturday will mark the return of Lamon Brewster.”

Marco “Captain” Huck cannot wait to erase the darkest hour of his career and finally become world champion. The European Cruiserweight Champion (25-1, 20 KOs) comes face-to-face with WBO Cruiserweight Champion Victor Emilio Ramirez (15-1, 12 KOs) at the Gerry Weber Stadium in Halle on Saturday night. Today both fighters showed their skills in front of 1.000 fans at L+T Fashion House in Osnabruck. “When I saw Ramirez in the ring, I wanted to fight him straight away,” Huck said. “I cannot wait for Saturday. I have worked hard with my coach Mr. Wegner and I am confident I will leave the ring victorious.”

While Huck did three rounds of pad work, Ramirez wrapped up his session when he spotted Ulli Wegner in the stands. “He is a tough guy,” Wegner lauded. “But Marco has really worked hard and drawn the right conclusions from his loss against Cunningham in December 2007. He can fulfil his dream and become the next German champion but he needs to stick to our game plan.”

It will be a busy night for Wegner who will also be in the corner for the second main fight of the night when Karo Murat (19-0, 12 KOs) collides with Sergey Demchenko (13-2, 10 KOs) for the WBO Intercontinental Light Heavyweight Title. Murat has just vacated his European Super-Middleweight Title to challenge at a new weight. “The first fight in a new division is always a tricky one but Karo is well prepared,” Wegner said. “His punches will be a lot harder.”

Also in action will be the “Nordic Nightmare” Robert Helenius (8-0, 4 KOs) as well as up-and-coming middleweight Dominik Britsch (14-0, 5 KOs), who is seeking his 15th win in as many fights when he takes on Salvatore Annunziaza (11-2, 2 KOs). Former WBO Heavyweight Champion Lamon Brewster (35-4, 30 KOs) will make his second fight for Team Sauerland, locking horns with Gbenga Oloukun (16-1, 10 KOs). Brewster received loud cheers today, with the crowd obviously remembering his spectacular KO victories over Wladimir Klitschko and Luan Krasniqi.