Johannesburg, South Africa (May 29, 2009) – Behind on all scorecards at the beginning of the 12th round, Perez landed a huge left hand jab that sent Mabuza to the canvas. Buzzed and on uneasy legs Mabuza beat the count. Perez proceeded to apply pressure and landed huge shots leaving no option for referee Kenny Chevalier to stop the fight with 1:06 left in the last stanza. With the victory, Perez (19-0, 14 KOs) becomes the mandatory challenger for Joseph Abgeko who fights Vic Darchinyan on July 11 for the IBF bantamweight title..

“My corner told me I was losing. I knew I had to throw decisive shots and try to knock him out,” said Perez after the fight. “I countered him and hit him right on the button, it was not a lucky shot. He was in his hometown and we battled hard, Mabuza is a lion, but I knew some close rounds were going to go his way. I’m ready for the big challenge now.”

Today at the Durandt Gymnasium, in the outskirts of Johannesburg, Yonnhy Perez and Silence Mabuza, weighed in below the mandated bantamweight limit (118 lb.) in front of the South African commission and IBF officials. The bout, presented by Branco Sports Promotions, in association with Thompson Boxing Promotions and Gary Shaw Productions, will take place at the Springs Indoor Arena, will be televised nationwide in South Africa and in the entire continent by the premier broadcaster, SABC Sport, which services 30 million viewers. The Mabuza – Perez IBF Eliminator telecast begins at 10 pm (local time), 1:00 pm (PST, USA). 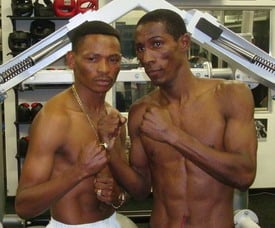 Ranked number six in the world by the IBF, 30-year old Yonnhy Perez (18-0, 13 KOs) is an exciting warrior who was adopted by Southern California fight fans after he arrived in the States from Cartagena, Colombia, he now resides at Santa Fe Springs. A staple on the local fight scene, Perez went worldwide in 2007 when he won the WBC Continental Americas title with a first round knockout of Samuel Lopez, and in June of 2008, he added the NABF crown by decisioning Oscar Andrade. In his last bout, on September 5, 2008, Perez stopped David Martinez in six rounds.

A native of Johannesburg, 31-year old Silence Mabuza (22-2, 18 KOs) has long been considered one of the top 118-pounders in the world. A longtime IBO champion who defended his title eight times over two reigns, Mabuza’s only two pro losses have come to pound-for-pound standout Rafael Marquez. Winner of three in a row, Mabuza – who is ranked third in the world by the IBF – is eager for another shot at the title.