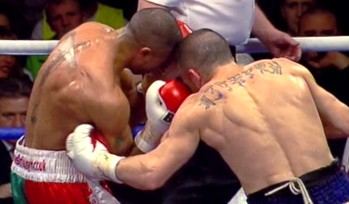 by James Slater – Tonight, at The Barnsley Metro Dome, UK, 28-year-old European super-bantamweight champion Rendall “2-Tone” Munroe of Leicester saw off the challenge of Spain’s 22-year-old former champion Kiko Martinez. Meeting in a rematch of their March 2008 fight, Munroe repeated his points victory – this time prevailing by a UD with winning scores of 116-112, 116-113 and 118-110. Southpaw Munroe, a dustbin man by day, improved to 18-1(8) as he successfully defended the belt he won from the Spaniard for the fourth time. “La Sensacion” fell to 20-2(15).

Tonight’s rematch was a much better fight than the original contest, and Martinez was far more aggressive and dangerous-looking, especially in the first two-thirds of the action. Coming out all guns blazing right from the first bell, the challenger let loose with both hands. Both fighters suffered minor cuts in the 1st round – Munroe cut above his left eye, Martinez above his right eye – and a fast-paced battle was already shaping up. Martinez took the round.

Munroe, much the taller man, boxed well in the 2nd, and even found time to smile at his opponent as he attacked. Munroe’s round. There was constant pressure from Martinez throughout the first eight rounds, and he certainly won the 3rd – his left hook a dangerous weapon that found the champion’s head a couple of times.

Martinez’ body work was also notable in the 4th round, and he was in much better condition than he had been last March. Munroe had a good round in the 5th, driving the younger man into the ropes and letting both hands go. The champ also went to the body well himself in the 5th – the first round in which he had been able to push the aggressive visitor on the back foot.

The 6th round was a close affair, and by the 7th the fight had really warmed up into a good fight. There had barely been any clinching to speak of, and both men’s fitness-levels were impressive. The 8th was a quiet round, however, and neither guy landed many shots at all. Munroe perhaps felt he needed a good round in the 9th and he got one. Then from round 10 until the final bell, it was all the champion. Martinez was visibly tiring, and Munroe was looking for the stoppage.

The 28-year-old really came on strong in the 11th, driving his man backwards as he bossed the round. With nothing left but his heart, Martinez did well not to get stopped in the 12th. Pinned in a corner for almost a full two minutes, the 22-year-old took some pounding from the southpaw Brit. Closing the show in fine style but failing to get the TKO, Munroe saw the gutsy Martinez make it to the bell.

Due to his late rounds surge there was only going to be one winner, and now the popular Leicester man can look ahead to some bigger fights during 2009. As for the man who so sensationally flattened Ireland’s Bernard Dunne in August of 2007, the future is not quite as bright. At still only 22-years-of-age, Martinez may be able to come again though.

On tonight’s under-card Sunderland’s Tony Jeffries made his pro debut. The 23-year-old light-heavyweight stopped an overmatched Aliaksandr Vayavoda of Belarus, 4-13-1(3) coming in, at 2-mins and 42-seconds of the 1st round.