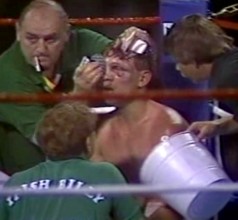 By Ted Sares – Sometimes getting to the sunshine can be a lifelong trek; some make it, others don’t. – The Author

I recently wrote a piece entitled, “Never Fall in Love with a Fighter.” Many posters responded by indicating their own examples of having fallen prey to this syndrome– and then having their hearts broken. I am no exception, for it happened to me when Joe Louis was KO’d by Rocky Marciano and it happened again and again after that. Still, in boxing, it’s difficult not to really engage one or two boxers in a way that sets you up for a big fall. I did it with Antonio Margarito and once again my heart was broken, but this time, the fall was not only due to his brutal defeat at the able hands of Sugar Shane Mosley, but also by the manner in which the hand wrap controversy surrounding the fight played out.

It is not my style to “pile on” a person when he is down. In this case, Margarito is about as far down as one can get. And if he makes the mistake of fighting in Mexico or some other county, he will badly impact his chances of getting his license approved. Indeed, he may well be done for good, as there is no assurance his revocation will be overturned in a year–if ever. And if he is given a life-time ban in the United States, the issue of whether he fights on in another country will provide the grist for many an interesting article.

Yes, he has broken my heart. I always viewed him as a great pressure fighter and one who “stalks, stuns and closes” in a uniquely entertaining way, but the shine is gone now. I have moved him aside –likely for good. Yes, there can be an appeal to the Commission’s findings and yes there could be a possible action in the courts of law, but in my view that would only prolong the misery. At the end of the day, rightly or wrongly, the fighter is in charge of his corner (though I question the wisdom of that principle and its inconsistent application). Therefore, he must accept responsibility whether willful intent was present or not. He owns it plain and simple and what Antonio owns here is an infraction that in my view is the very worse one in boxing.

Again, however, it’s easy to kick a man when he is down and to do so with mob mentality. That’s not my thing, though I make no excuses and have no pity for what Antonio or his manager did. In the final analysis, we the fans are the ones who really were hurt by this; we were betrayed. Now he and his trainer will pay the piper. If that means a ban for life in the United States, so be it; I can live with it. The punishment should be commensurate with the severity of the offense and the offense in this instance conjured up a night when I attended the Davey Moore-Roberto Duran fight at Madison Square Garden back in 1983. It conjured up a co-feature when a good looking kid from Tennessee came to New York City and got mugged. He was a kid from a small town see who had gone to the big city and met the dark side of boxing. His name was Irish Billy Collins, Jr.