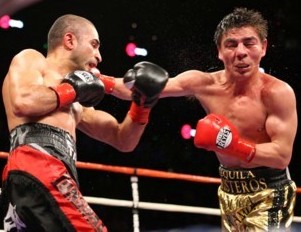 The crowd-pleasing twinbill, presented by Gary Shaw Productions, LLC, and Bob Arum’s Top Rank, Inc., emanated from The Honda Center in Anaheim, Calif. It aired on SHOWTIME at 9 p.m. ET/PT (delayed on the west coast).

The referee, after conferring with the ringside physician, halted the Darchinyan-Arce proceedings due to cuts around the challenger’s eyes and on his head. There were no knockdowns.

“He surprised me. I didn’t expect a fight from him like this,’’ said Darchinyan, who was ahead 109-100 on the three judges’ scorecards after 11 completed rounds. “But he was tough. He is a good fighter. I hit him with some good shots, but he kept coming back.

“I would have liked to knock him out cold, but this is OK. I am happy. I feel great. Maybe if it goes another round, I knock him out.

“Arce hit me with some good shots, but I was too strong. I think my speed was a difference. I am ready to fight anybody.’’

Darcinyan was making his first defense since unifying the 115-pound division with a ninth-round knockout over Mexico’s Cristian Mijares Nov. 1, 2008, on SHOWTIME. Arce, a former WBC 115-pound and World Boxing Organization (WBO) 108-pound titleholder, gave it his all. The loss ended a five-fight winning streak for Arce, who had won 31 out of 32 entering the bout.

DeMarco, the son in law of former world champion Raul “Jibaro” Perez, got the victory when Kid Diamond would not come out for the 10th round due to an injury. It was DeMarco’s fourth victory on SHOWTIME; the others came on ShoBox: The New Generation in 2008.

At the finish of a good action fight that featured many exchanges, DeMarco was ahead on two scorecards, 88-83, and behind on the other, 86-85.

“I got the confidence to enter the ring from my family and trainers.’’ DeMarco said. “They believed in me and trained me and that’s how I got the win.’’

Saturday’s telecast will re-air on SHOWTIME and the premium network’s multiplexes this week as follows:

The fights will be available ON DEMAND from Feb. 10-March 9.

The next fight card on SHOWTIME will take place on ShoBox: The New Generation on Friday, Feb. 27,when IBF cruiserweight champion Tomasz Adamek (36-1, 24 KOs) of Jersey City, N.J, by way of Golwice, Poland, makes his first defense against unbeaten Johnathon Banks (20-0, 14 KOs) of Detroit at the Prudential Center in Newark, N.J.