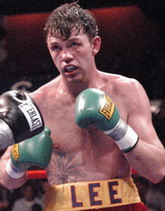 — Click here to listen to the show — Call in LIVE: (347)843-4293 — OnTheGrind Boxing Radio returns LIVE Thursday February 12th at 8pm est/ 5pm pst (1am gmt Friday) with another great weekend preview edition. In addition to looking ahead to a great weekend of fights, OnTheGrind will be welcoming rising Irish middleweight star, the 16(13)-1 Andy Lee (photo by Peter Mark Heintzelman / East Side Boxing). Also, OnTheGrind’s Ireland Correspondent Paddy Cronan will be giving a scouting report about, and interviewing rookie light heavyweight from Limerick, Jamie Power. The OTG team also hears from pal and NABC super middleweight champ, “The Comanche Boy” George Tahdooahnippah 16-0 (15KO), following yet another great KO victory by the up & commer. George tells the guys who his next opponent is, and promises a training update for all of his fans. Of course Friday Night Fights, and the big HBO showdown between Ali Funeka and friend of OTG Radio and Lightweight Champion of the World Nate Campbell will be discussed as well. As always the commentary, analysis, news, and predictions that make OnTheGrind Boxing the Pound4Pound Kings of Boxing Radio will be brought to you by your faithful hosts BigTime Tim Kudgis and Suge Green. It’s On The Grind in ’09…worldwide..

OnTheGrind Boxing Radio is LIVE with their big weekend wrap up show, Sunday February 8th at 8pm est/5pm pst (1am GMT Monday). Big boxing news has dropped all weekend, and the OnTheGrind team is here to cover it all from every angle. Joining the guys this evening will be undefeated lightweight fighting out of Memphis Tennessee, the 28(19)-0 Anthony Peterson. In 13 short days Peterson will be doing battle with Edner Cherry on one of boxing’s most prestigious stages, the ring of Madison Square Garden, but tonight he’s OnTheGrind.

Also stopping in to talk to the team, is friend of OnTheGrind Radio and the WBC Continental Americas Cruiserweight Champ, The Celtic Warrior Bobby Gunn.

The OTG Team also plan on getting acquainted with a former amateur standout, the 20 year old welterweight with an 8(8)-0 record, Keith Thurman.

Without question the commentary, analysis, predictions, and updates that make OnTheGrind Radio the Pound4Pound Kings of Boxing Broadcast Journalism will be coming your way courtesy of “The Iceman” John Scully, BigTime Tim Kudgis, and Suge Green. It’s On The Grind in ’09. Visit us at www.onthegrindboxing.com . Call-in Number (347) 843-4293

OnTheGrind Boxing Radio – Call in Number (347) 843-4293 – is back LIVE Thursday February 5th at 8pm est/5pm pst (1am GMT, click on the player to listen LIVE) with our weekend preview edition, and it’s another packed show. Strength and conditioning coach to boxing’s stars Robert Ferguson, will be discussing the importance of fitness and nutrition as it relates to the sport. Some of his clients have included; Fernando Vargas, Sergio Mora, Samuel Peter, Lucia Rijker, Maureen Shea, and Stevie Forbes. Also, OnTheGrind’s Ireland Correspondent Irish Paddy Cronan joins us with his guest, upcoming prospect in the welterweight division Danny O’Connor. Danny was 2008’s National Golden Gloves Light welterweight champion.