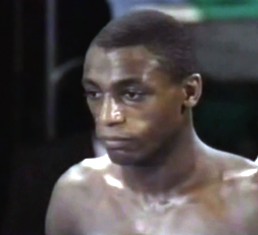 29.11.07 – by James Slater: Twenty-nine years ago today (November 28th) Herol Graham, the finest British boxer in history to never win a world title, boxed as a pro for the very first time. A six rounds points win over one Vivian Waite saw the beginning to an ultra-talented fighter’s career.

Herol, a southpaw, would rack up a very impressive 38 wins (21 inside the distance) without defeat, collecting not only the British, Commonwealth and European titles at light-middleweight, but also the same trio of championships up at middleweight as well. Some mesmerising displays of boxing genius were witnessed from Graham along the way. Seemingly impossible to hit cleanly to the head, Graham frustrated and then defeated some excellent men during his dazzlingly brilliant prime years.

Capable men like Lindell Holmes, Sanderline Williams and Mark Kaylor were beaten with some ease by Graham during the mid-1980’s, along with the superb Ayub Kalule – a 10th round TKO victory and European middleweight title fight win that was probably Graham’s finest-ever career triumph. Kalule had been in with Sugar Ray Leonard and Davey Moore, losing in honourable efforts for the WBA light-middleweight title on both occasions. Kalule was genuine world class, yet after his loss to Graham he announced his retirement. Strangely, however, in his previous fight to the boxing lesson he’d received from Herol, Kalule had beaten the talented Sumbu Kalmabay in defence of his European belt. Kalambay would soon become the very first man to defeat Graham.

Losing on points over 12 rounds in May of 1987, Graham looked somewhat ordinary for the first time. The loss was a big upset, and Graham was forced to regroup. He bounced back with stoppage wins over James Cook and Johnny Melfah in British middleweight title fight wins, before engaging in his first shot at a world title. Graham’s chance would not come against an opponent who could be considered anywhere near easy though – he would have to match his skills with those of the great Mike McCallum.

Losing a desperately close spilt decision over 12 rounds, in a fight that contested the vacant WBA 160 pound championship, Graham performed admirably. The loss was nothing to be ashamed of, clearly, but once again Graham would have to work his way back up to a world title opportunity. Two wins followed, one over Ismael Negron and, before that, one over Britain’s Rod Douglas (who suffered a career-ending brain injury during his 9th round loss) before Graham got his second chance at world glory. This time, however, the unthinkable happened – Herol Graham, hitherto thought to be almost un-hittable, was about to be knocked out!

Once again fighting for a vacant world title – this time the WBC’s middleweight strap – Graham boxed the fearsome punching Julian Jackson. Fighting in Spain in November of 1990, Graham was giving Jackson both a boxing lesson and a fearful hiding for three-and-a-half rounds. Such was the condition of Jackson’s swollen eyes (it was the detached retina that Jackson had suffered earlier in his career that prevented the fight from taking place in the U.K) referee Joe Cortez later said he was mere seconds away from calling a halt to the bout to save Jackson. But with Cortez hovering, the fighter known as “The Hawk” struck Graham with one of the most devastating right hands ever seen. Graham was out cold as soon as the blow connected with his chin. It was all over in round 4, and for a second time Herol was the loser in a world title fight. How very close he’d been to finally winning boxing’s ultimate prize though!

Many people said Graham would never be the same again, but still he carried on boxing. It was a distinctively bumpy path for Graham in his next three fights, however. Winning only once – against John Ashton in a British middleweight title fight in December of 1991 – Graham would retire after losing on points to Sumbu Kalmabay (in a return fight) and then via 9th round stoppage to Frank Grant in another British middleweight title bout. It seemed Herol’s great days were well and truly over. This was not the case, though, and in November of ’96, against the advice of almost everyone, Graham launched a come-back. Some fine, odds-defying, wins followed too.

Beginning with eight rounds points wins over Terry Ford (U.S) and Craig Joseph (U.K) Graham, now aged 37, would eventually score superb wins over both Jamaican-born Chris Johnson and America’s Vinny Pazienza. The unbeaten Johnson was a highly touted boxer who great things were expected of in the pro ranks. Winning both Commonwealth gold and Olympic bronze, in 1990 and 1992, respectively, Johnson was now an 18-0 prospect. His fight with Graham was seen as a decent test of a fight that he could learn from, but nothing more. Graham had other ideas. Despite being the much older man, Graham put on a punch-perfect performance – stopping his man in eight very impressive rounds. All of a sudden, Herol Graham was back at the top, his come-back now a proven success.

Picking up the WBC international super-middleweight title in the Johnson fight, Graham now defended it against former two-time world champion Vinny “The Pazmanian Devil” Pazienza. Once again, Graham’s speed and class proved to be victorious. The unanimous twelve round decision victory earned Graham one more crack at a world title. Would it prove to be third time lucky for him? Sadly, no.

Fighting America’s Charles Brewer in Atlantic City, N.J on March 28th 1998, Graham looked as though he might finally nail the big one. Scoring two knockdowns over the IBF 168 pound champ in round three, things were going great for Herol. Once again, though, the Sheffield man somehow let victory slip through his fingers – succumbing to a tenth round TKO defeat in a very good fight. Graham never fought again.

The history books would forever read how Herol “Bomber” Graham failed to become a world champion. Those that saw him in action know how truly special he was though.

Graham’s final ring record reads: 48 wins (28 inside) and 6 losses. He is undeniably one of the greatest British boxers of all-time.