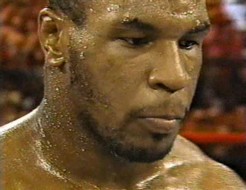 29.11.07 – By James Slater: According to the man who was the last to face him in the ring, Chuck Wepner, Sonny Liston was probably the “best intimidator” in all of boxing. “Some guys were so scared, they could barely get into the ring.” says Chuck on the BBC television documentary Reputations. Having fought the man, Wepner knows of what he speaks.

Though he managed to go 9 tough rounds with the then ex-heavyweight king (being forced to retire on his stool prior to the start of round 10 after being severely cut) there were many other good, even great, heavyweights that were so scared by Liston they never had a hope of lasting that long, much less actually beating him.

And though Liston is arguably best remembered for his two fights with the one man he could never intimidate, in Muhammad Ali, it is beyond debate that Sonny was one of the most adept boxers in heavyweight history at frightening an opponent. Is Liston in fact, THE single most successful heavyweight in all of boxing when it comes to being able to win fights through little other than scaring his man stiff – therefore making his adversary an easy, ready-for-the-taking, deer caught in the headlights, “victim?” Of course, Liston had other ring skills, a punishing jab and awesome punching power, to name just two. But without his ability at terrifying an opponent even before the first bell, Sonny was certainly a lot less effective a fighter. This was also very much the case with the other two intimidating big men this article is written about.

Both Mike Tyson’s and George Foreman’s names spring to mind when thinking of heavyweight boxers who were able to win fights simply by reducing a challenger to relative helplessness through fear. And like Liston, when this particular weapon in the arsenal failed, Foreman’s and Tyson’s effectiveness as fighters was quite severely compromised. Take away either heavyweight champions’ intimidation tactics by refusing to fall to them, and you had a good shot at a win. Ali did it to Liston and Foreman. While, most famously, James Douglas and later, Evander Holyfield, did it to Tyson. When this happened, and the fear was nowhere to be seen in the eyes their opponent, the tables were very much turned, and it was Liston, Foreman and Tyson who became the ones being intimidated. Really, all three greats relied so much on their menacing glares, their pre-fight promises of destroying a man and their mid-ring stare downs, that once they began to fail the number of losses began to mount.

After his attempts at making the young Cassius Clay quiver in his boxing boots failed, Liston soon realised that other fighters would follow Ali’s example, and refuse to be scared. This made things a lot tougher for him in the ring. You can add George Foreman’s name here also ( at least for the remainder of “career number one,” anyway). And the same thing happened with Tyson. After Buster Douglas sensationally KO’d him, “Iron Mike” found out that other men were suddenly willing to fight with him. As was the case with Sonny and George, Mike’s wins became tougher to earn. All three heavyweights were still capable of scaring some opponents after their most famous losses, but this was no longer the norm.

Liston was at his most intimidating going into his two fights with Floyd Patterson, who was scared stiff of him going into both bouts. Foreman was at the peak of his intimidation powers when annihilating Jose Roman and Ken Norton, both of whom were affected very much by pre-fight nerves. While Tyson scared all but a few of his opponents before Douglas – most notoriously Michael Spinks, who looked like the very epitome of a fighter who had frozen. Bout who was the most effective intimidator, Liston, Foreman or Tyson?

Tyson admired Liston a great deal during his prime years, as did a young Foreman. There is little doubt both men wanted to be like Sonny. Loving the way Liston petrified opponents, the young Foreman, and later the young Tyson, modelled themselves on the champ from the early 1960’s. Pretty soon, with their aura growing and growing, the twenty-somethings were seen as being invincible – as was Liston back in his heyday. Mike seems to have understood how much Liston relied on his ability at intimidating an opponent, even saying as much in a late-1980’s interview. So too did he probably realise how affected he would be himself once his effectiveness in that regard began to fade. But did George Foreman comprehend how much he himself had grown to rely on his talent for scaring a guy witless? Whatever the case, and whether either guy knew it would happen beforehand or not, as soon as the fear diminished in their opponents, Foreman and Tyson were as reduced as fighters as relentlessly as Liston had been.

All three heavyweight kings became a lot more beatable looking once they stopped frightening practically every heavyweight occupying the top-ten, that much is certain. But at their best, no other big men in boxing history were as proficient at making a rival’s knees tremble as they awaited what was in store for them once bell one rang out. The bottom line is all three were absolute monsters when it came to putting the fear of God into an opponent. Indeed, who can split them and say who was the scarier?