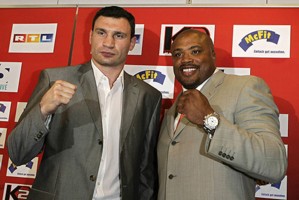 Today, at two o’clock, inside a conference hall of the Munich’s Olympiahalle, the WBC Champion Emeritus Vitali Klitschko began his return into a professional ring. On September 22, 2007, inside this same arena, Vitali Klitschko will face Jameel McCline. Ironically, even Vitali’s biggest critics have welcomed his return. This is due to the fact that in recent years the heavyweight division has lost its glamour, and Vitali’s return can and will bring more sensation to the boxing world.

Press conference started on time, as both Vitali and Jameel arrived early. Bernd Bonte, manager of Sport FIVE marketing company, opened press conference. He made an announcement that just couple hours earlier, tickets for the upcoming fight went on sale, and at the time of press conference over 1.5 thousand tickets were already sold.

Then, the executive director of Olympiahalle, Wilfrid Spronk, addressed media members. He expressed great honor to host this fight, and reminded everyone that inside this arena Mohammed Ali defended his championship title against British Richard Dana. He expressed his confidence that boxing fans around the world would welcome this fight, and that the sixteen thousand seat arena will be sold out.

“For Jameel this fight is a great chance to prove that he is one of the strongest heavyweights. We want to thank Vitali for offering this fight. If Vitali hopes that Jameel will be an easy opponent, it will be his mistake. Jameel will prepare for this fight like never before. You saw what he did to Valuev in those first three rounds, and had it not been for an injury, we would have won it. I want to wish Vitali best luck in preparation for this real fight.”
As he finished, Jameel started to talk.

“This fight will not only give me a chance to get back into the top of the heavyweight division, but also give me an opportunity to get a title fight,” explained Jameel. “I received a lot of criticisms in my past fights, but this time you will see how dangerous I can be. I will be ready for Vitali. Once I’m back home, I’ll start my training. I’m willing to put everything on the line to win this fight.”

Vitali’s trainer, Fritz Sdunek was next to speak.

“It’s a pleasure to work with Vitali again. The upcoming fight will be a starting point of our return into a professional ring, and then to a championship fight. Last nigh we started our training. It didn’t feel like it has been a long time. Everything is ready. I watched Vitali closely and I will tell you that he is ready to start with our training. I know that Vitali will not only honorably return into a ring, but also in a near future he will fight for the championship title.”

Once Sdunek finished, Vitali walked over to the microphone and was met by applause.

“It’s time to return. I had to take a break in my professional career due to an injury I received in November of 2004. I never left boxing, and once I was well I returned to train at a gym. I want to thank Jameel for accepting my challenge. He is truly a strong fighter, who also is a very dangerous opponent. He beat strong fighters like Michael Grant, Lance Whitaker, and Shannon Briggs. I perfectly understand that the upcoming fight will give Jameel a chance to reach the top.

Therefore, he will be ready for this fight like never before in his life. In his last fight with Valuev, we had a strong chance to win had it not been for an injury. I understand that the upcoming fight will be a test for me and I will do my best to be ready for it. I will be prepared for this fight. The main thing is a victory, and only a victory.”

As Vitali finished, journalists began to ask questions. To a question about their training camps, Vitali answered that he will use the same place Wladimir used to prepare for his fight against Brewster in Kitzbuehel, Austria. Jameel responded that he would train in West Palm Beach, Florida.

Asked if Vitali will seek Wladimir’s advice, (since in 2002 Wladimir beat Jameel) Vitali said that he will certainly use it, but he reminded everyone that Jameel’s style and techniques have change in those four years.

Jameel also responded to that question, stating that since he faced Wladimir, he has become much stronger and improved his skills and other qualities.

Vitali was asked if his training would be affected by his state work. Vitali reminded that summer is a holiday break season so his political life wouldn’t affect him. He also reiterated that he doesn’t mix sports with politics.

Vitali reminded that the dream of the Klitschko brothers is closer than ever, and with Wladimir completing his half (holding the world championship title) Vitali is ready to win back the championship title so that both brothers can simultaneously become the world heavyweight champions.

“I returned to win back the championship title, however I will not look past my opponent. Right now I have to win against Jameel. That’s the only thing I will concentrate on. I will devote my full attention and training for this fight. Only after our fight, will I think about the championship title.”

On that note press conference ended, as Jameel and Vitali faced each other for photographers. They departed, giving interviews on their way out.