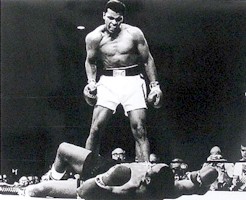 01.06.07 – By Mike Dunn: Did Sonny Liston throw one or both of his fights with Cassius Clay? A lot of people think so, including boxing insiders. Many others don’t believe it. Some think Liston may have thrown the second fight in Lewiston, Maine, but not the first one. In any case, controversy has been a shadow over the two Clay-Liston fights and that shadow remains to this day. Unsatisfactory endings to both bouts (in February of 1964 at Miami Beach and in May of 1965 at Lewiston) have created speculation and cast doubts about the veracity of Liston’s performances.

In simple terms, this is what happened in the two encounters: Liston lost his title to Clay (who would soon change his name to Muhammad Ali) in the Miami Beach bout when Liston refused to come out of his corner for the seventh round. Liston, who had received a thrashing at the hands of the younger, quicker Clay, claimed that his left shoulder had been injured.

In the rematch a year and three months later, Liston went down in the first round from what some referred to as a “phantom punch.” It appeared that Liston was able to get up, but chose not to. Clay (now known as Ali) was awarded a first-round KO.

Did Liston throw either fight or both?

Those who believe Liston laid down typically point to his mob connections. In 1964 and 1965, Liston was under the influence of a flamboyant character with underworld ties named Ashe Resnick. Resnick owned a Las Vegas casino called the Thunderbird, where Liston trained. It is a fact that the Thunderbird was controlled by the New York mob. It is also a fact that Resnick and Liston had a close relationship.

There’s no disputing that when Liston went into the ring both times against Clay, Resnick was very much a driving force in Liston’s life. Did Resnick orchestrate a gambling coup by prearranging for Liston to lose in the middle rounds in the first fight? Did Resnick prearrange with Liston to go down in the first round of the rematch?

While it’s easy to leap to conclusions, there’s no evidence at all to support the fixed-fight theory.

The hard facts are these: 1. Liston was much more valuable to Resnick and to the mob as the champ than as the ex-champ;

2. The mob had no ties with Clay/Ali, and therefore it was not to the mob’s advantage to have Clay/Ali as champ; 3. There has never been a verifiable paper trail, testimony trail or money trail that has proven there was a fix in either fight.

If Liston wasn’t part of a fix, then what happened?

When Liston put his title on the line against Clay (who would later become known as Muhammad Ali) on Feb. 25, 1964 in the Miami Beach Auditorium, Liston was thought to be invincible. Liston, whose intimidating presence and predatory scowl evoked fear in the strongest of men, walked into the ring that night as an 8-1 favorite. No one had any idea before February of 1964 what Clay/Ali was going to become. Clay, the brash, young challenger from Louisville, Ky., had just 19 pro fights to that point and frankly wasn’t considered much of a threat to Liston’s crown. In Clay’s previous two fights, he had earned a narrow 10-round decision over a much lighter Doug Jones in a surprisngly tough battle at Madison Square Garden, and he had been on the deck in the fourth round and in some difficulty against England’s Henry Cooper before registering a fifth-round KO. Clay was undefeated, true, but he hardly had what one would call a glittering resumé.

Liston, by contrast, had a record of 35-1 and was being compared favorably to the greatest of heavyweight champs, including Joe Louis. Liston was the recipient of the same kind of “Superman” hype that, in later years, George Foreman and Mike Tyson would be subject to.

The public by and large believed that Clay would succumb to Liston’s heavy fists in the same manner that Floyd Patterson and Cleveland Williams and Albert Westphal and Zora Folley had. More importantly, Liston believed it, and that was the champ’s undoing.

It’s common knowledge that Liston didn’t train very hard for the Clay fight. Some boxing insiders, including writers Nigel Collins and Jerry Izenberg, partially blame Resnick for Liston’s lack of conditioning. They say that Resnick fed Liston’s appetite for wine, women and song and, even worse, had Liston believing his own press clippings, which is always dangerous for a prizefighter.

The result was that Liston went into the ring at Miami Beach unprepared to go 15 hard rounds with Clay. As it turned out, Liston couldn’t go six hard rounds with the younger, faster challenger.

Did Liston’s corner ‘burn the gloves’?

Clay turned out to be bigger and stronger than Liston expected. And Clay didn’t melt when Liston stared at him. Those factors no doubt worked against the champ.

When it became apparent to Liston that he wasn’t going to beat Clay the conventional way, he allegedly ordered one of his cornermen to “burn the gloves.” According to reliable sources, an ointment was then rubbed on Liston’s gloves prior to the start of the fourth round and Liston employed chemical warfare tactics to try and balance the scales. The illegal strategy may have worked, except for Clay’s ability to take a hard beating to the body and the presence of mind of Clay’s trainer Angelo Dundee.

Clay came to his corner after the fourth round complaining of a burning sensation in both eyes. It’s obvious from film footage that Clay was in a lot of discomfort. Clay told Dundee to remove his gloves and stop the fight, but Dundee remained calm and helped Clay to ride out the storm. “This is for the world championship,” Dundee told his fighter. “There’s no turning back
now.” When the bell rang to start the fifth round, Dundee told Clay to retreat and pushed him out to meet the champ.

As the film clearly shows, Liston did his best to get to Clay during the first two minutes of the fifth round. If Liston and Resnick had prearranged for Liston to lose, then why was Liston trying so frantically to get Clay out of there?

In fact, Liston landed several hard blows to Clay’s midsection during those two minutes. Clay, as he would prove many times later in his career, could take a whale of a punch. Liston landed to the body but wasn’t able to connect solidly to Clay’s head, as Clay instinctively moved back and held on. Clay may have been blinded, but he was still elusive. After two minutes, Clay’s perspiration began to wash the sting of the ointment from his eyes and he was able to see clearly again.

From then on, Clay administered a healthy beating to the once-fearsome champ. It appeared a few times that Clay might even knock Liston out. Liston, an angry welt raised under his left eye, sat on his stool and refused to come out for the start of the seventh round. He was an exhausted and thoroughly beaten fighter. As Dundee and others have noted since, “Liston got old during the fight.” He went into the ring as the most feared pugilist in the world and he left the ring in humiliation. The story about the injured left shoulder was apparently an excuse concocted to soften the blow of Liston quitting in his corner.

Why didn’t Liston get up at Lewiston?

Fifteen months later, the fighters faced each other again, this time in a converted high-school hockey rink in Lewiston, Maine. Incredibly, Liston went into the ring that night as the betting favorite again.

People like myself who don’t believe that the fix was in at Lewiston are hard-pressed to explain Liston’s actions. Liston looked for all the world like a fighter cashing in the chips that infamous night. He almost certainly could have gotten up, but he chose not to.

If the fix wasn’t in, then why didn’t Liston get up?

There isn’t a simple answer to that question. There are several factors that play a role in the controversy that surrounds Clay-Liston II. Here are three of those factors: