David Stevens, a power-punching boxer from nearby Reading, Pa., produced one of the more dramatic endings in recent SHOBOX: The New Generation history, theatrically dropping and stopping Sean Hemphill with just two seconds left in their hotly contested eight-round super middleweight showdown to capture the biggest win of his young career in the main event of SHOBOX on Friday, January 20 live on SHOWTIME from Wind Creek Casino in Bethlehem, Pa.

Stevens, whose left boxing shoe had to be repaired before the start of the seventh round, floored Hemphill with 21 seconds left in the final frame with a barrage of rights and lefts that caused Hemphill to slump in his corner. Hemphill rose and told referee Shawn Clark he was fine to continue. But Stevens (12-0, 9 KOs) jumped on him and caught the New Orleans’ native Hemphill (14-1, 8 KOs) with a razor-sharp left-hook that sent Hemphill barreling into the ropes as Clark waved the fight off at 2:58 of the eighth frame. 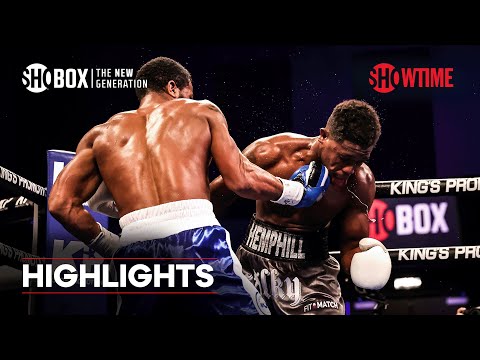 Stevens led 68-65 on all three judges’ scorecards entering the final round, even while fighting the last few rounds with the sole of his left boxing shoe coming apart and dangling until his cornerman sliced it off.

“I felt like it was a good performance in front of my hometown crowd,” Stevens said. “I didn’t know how the judges had it scored and I knew I wasn’t executing like I should have been, and I had to pick it up like my corner was telling me. Near the end I just had to stay relaxed. I think I could have done a better. Just improved on a little bit of everything. We were both breathing pretty heavy near the end there and I knew I just needed to keep pushing.”

The SHOBOX tripleheader will re-air on Monday, January 23 at 10 p.m. ET/PT on SHOWTIME EXTREME®. This marked the second straight year that SHOBOX opened the calendar year with a tripleheader of undefeated fighters.

The 22-year-old Stevens fought a mature, disciplined fight, continuously walking forward with his lead jab followed by power shots. Hemphill, for his part, fought mostly off his back foot, relying on his long jab and occasionally stopping and firing back to blunt Stevens’ attack. Both had their moments, but it was Stevens who landed the harder, more telling shots, stunning Hemphill numerous times throughout the match.

Both fighters had high-powered trainers in their corner, with Hemphill guided by 2002 Boxing Writers Association of America Trainer of the Year James “Buddy” McGirt, and Stevens piloted by highly-respected 2003 BWAA Trainer of the Year Ronnie Shields.

In the co-feature, West Philly blue-chip prospect Atif Oberlton (8-0, 6 KOs) took a little time to warm up but once he did the busy southpaw showed off his body-punching and boxing ability in an impressive points victory over Artem Brusov (12-1, 11 KOs) in the eight-round, light heavyweight bout. The 24-year-old Oberlton, who describes himself as an emerging fashion designer outside the ring, won by scores of 79-73, 78-74 and 78-74 to remain undefeated.

“I feel good and was glad I went the eight rounds,” Oberlton said. “It really showed my conditioning. A lot of guys who have my type of record early on in their careers don’t take advantage of the opportunities and taking on opponents like I am. I knew it wasn’t going to be easy. He’s a guy from Russia and he’s no slouch. I started a little slow, but that’s the thing about pro boxing is you have more rounds to show what you need to show. I’m proud of myself tonight.”

The 6-foot-3 Oberlton was led into the ring by unified 122-pound champion Stephen Fulton Jr., and like Fulton, Oberlton controlled the distance and jabbed his way to a win. Trained by highly respected Philly trainer Shar’ron Baker, one of the few female trainers in the sport, Oberlton, a highly-decorated amateur, kept Brusov at bay with whipping uppercuts and a chopping left hand.

Brusov, who is trained by former two-time title challenger Matt Korobov, emerged with a cut over his right eye following the first round, the result of an accidental head butt. Oberlton stunned Brusov in the second with a pair of left hands. Brusov landed a counter right in the sixth that briefly hurt Oberlton, and he finished strong with a hard left to end the eighth round, but those types of hard shots were the exception for the Russian now living and training in Fort Lauderdale, Fla., as Oberlton cruised to victory.

In the telecast opener, Julian Gonzalez from Reading, Pa., remained undefeated with a dominant fourth-round stoppage victory, dropping Rosalindo Morales in the first round and halting him with a stiff right hand that caused referee Shawn Clark to intervene and wave the 130-pound bout off at 27 seconds of the fourth. Gonzalez led 30-26 on all three judges’ scorecards at the time of the stoppage.

“I’m not surprised the way it ended,” Gonzalez said. “I knew he had power, but so do I. I just had to stay composed and let him make the mistakes. I was using the straight right hand a lot, but I have power from the right and the left. It’s not that important to get a knockout. Eventually, we’re going to be getting some decisions. I just have to keep believing in myself and get the job done.”

With seconds remaining in the opening frame of the scheduled eight-round bout, the 21-year-old Gonzalez (9-0-1, 9 KOs) floored Morales, 29, with a winging right hand. Morales (9-1, 2 KOs) rose but Gonzalez continued to punish the southpaw from Ellwood City, Pa., bloodying Morales’ nose in the second with a straight left and beating him to the punch with his superior speed and athleticism. Gonzalez, who goes by the nickname “Gifted,” has sparred with Fulton Jr., experience that served him well on Friday.

An intriguing sub-plot to the 130-pound bout was the presence of Allen Smith ringside, who nearly 20 years ago helped a 10-year-old Morales and his mother and sister complete a cross-country trip to Pennsylvania after their car broke down in Nashville, Tenn. Smith paid for car repairs and took the family in for six days and purchased bus tickets for them to make it to relatives after the car was deemed irreparable. Morales and Smith had lost touch until reconnecting in December over the phone and then on Friday, when Smith watched the bout from ringside in an emotional reunion at the Wind Creek Casino.