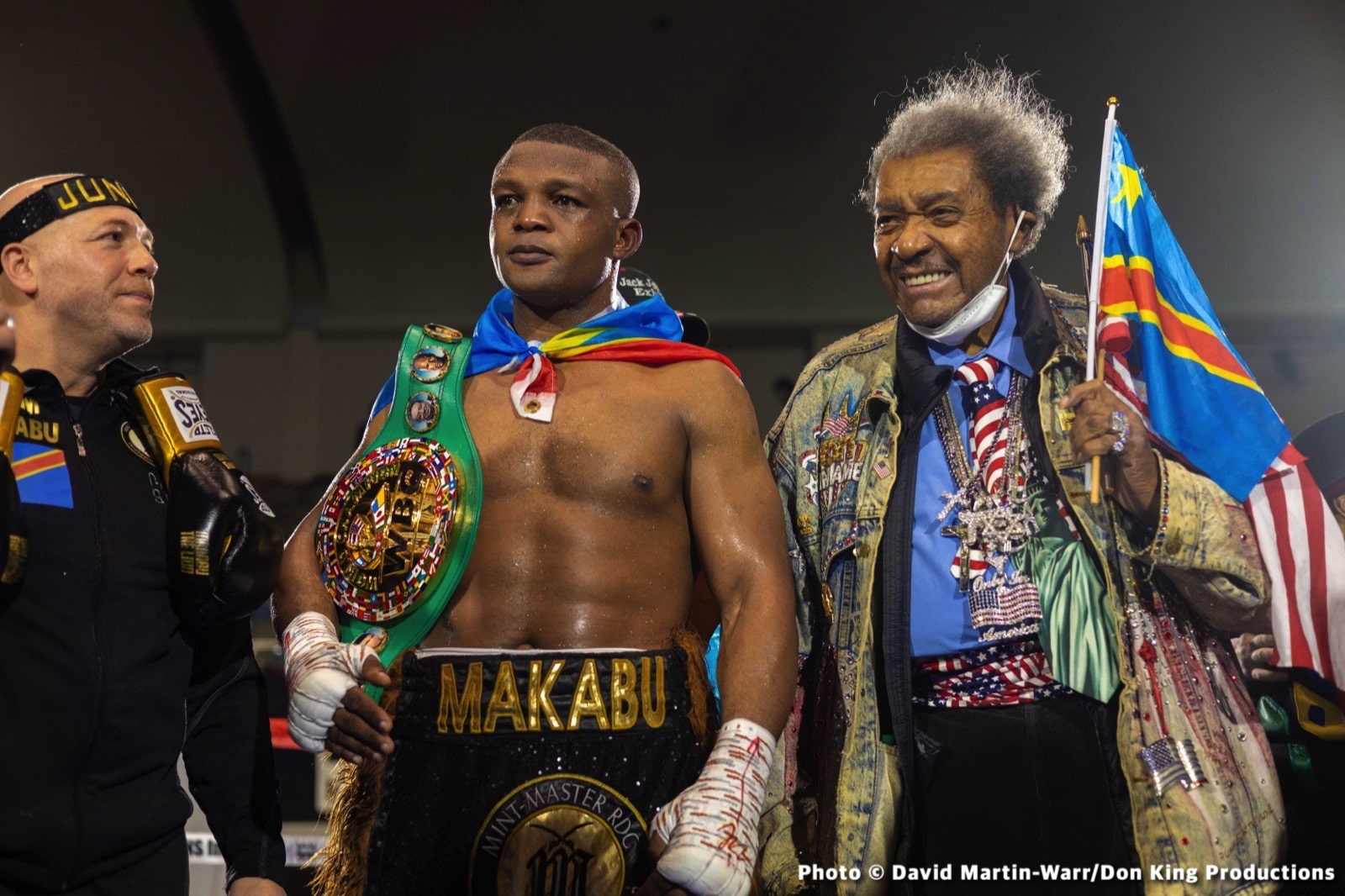 Proving that you can go home again, Hall of Fame boxing promoter Don King returned to his native Buckeye state on Saturday night to host an outstanding slate of championship boxing at the sold-out W.D. Packard Music Hall in Warren, Ohio.

Judges Steve Weisfeld and Jamie Garayua scored the closely contested bout 115-113 and 116-112 respectively for Makabu, while Nathan Palmer saw it 115-113 for Mchunu.

“Today I didn’t come for the knockout,” said Makabu, who won the vacant WBC belt by registering a unanimous decision over Michal Cieslak almost exactly two years ago on Jan. 31, 2020. “I just came to show that I can box. I am going to box and knock Canelo out in my next fight, baby.”

In his United States debut, the 34-year-old Makabu pressed the action against his compatriot and successfully followed his team’s game plan from the opening bell to run his unbeaten streak to 10.

“We were leading the fight comfortably,” said Makubu’s trainer, Damien Durandt. “Junior (Makabu) boxed beautifully. We knew what Mchunu was about. He brought in some elements that surprised us. I told Junior not to look for the knockout. If it comes, we will take it. All I wanted from round one was points. He said to me, ‘I got you baby.’ “

Mchunu, who captured the WBC Silver title with a unanimous decision over Denis Lebedev on Dec. 21, 2019, saw his four-bout winning streak come to a disappointing end despite effectively counterpunching across 12 rounds.

“I landed a lot of my punches, but the judges saw it the other way, said the 33-year-old who fought in the U.S. for the sixth time. “He (Makabu) didn’t really hurt me.”

Despite residing less than 300 miles away from each other, the two evenly matched South African cruiserweight champions traveled more than 8,000 miles to Warren, Ohio, to headline Don King’s return to his home state. In addition to living in the same country, Makabu and Mchunu are only one year apart in age, both fight as southpaws, are only one inch apart in height.

Judges Nathan Palmer and Brian Kennedy saw the action-packed fight 118-109 and 116-111 respectively for Bryan, while Steve Weisfeld scored it 115-112 for Guidry.

A confident Bryan, who captured the vacant WBA Heavyweight title by flooring Bermane Stiverne twice before referee Frank Gentile stopped the contest at 1:26 of the 11th round exactly one year ago on Jan. 29, 2021, looked to the future while praising his game opponent.

“Trevor Bryan is here to stay, said the Fort Lauderdale, Fla., resident. “I showed that tonight. I am only going to get better and keep improving my skills. I worked until the final bell. I am taking my talents overseas. I am going to make those fights against the top three, which is Tyson Fury, Anthony Joshua, and Oleksandr Usyk. I deserve those fights. This is a steppingstone for me. Shout out to Jonathan Guidry. He was a tough opponent.”

Despite suffering his first pro defeat, Guidry, who is a crabber back in his native Louisiana, earned the crowd’s respect by standing toe-to-toe with the taller champion, overcoming a swollen right eye, effectively landing jabs from in close, and never becoming rattled despite the obvious height and weight advantage of his counterpart.

“It was a close fight,” said Guidry after the decision was announced. “We only trained for four weeks for this fight. I want another shot at it. If I get in a little bit better shape, I’ll put on a better show. It was heartbreaking. If I had a little bit more gas in the tank, I could have gotten him (Bryan).”

With Bryan aiming to end the bout and not leave the outcome in the judges’ hands, the champion sent a wobbly, but resilient Guidry to the canvas for the fight’s lone knockdown as the final bell sounded to end the unforgettable night of boxing.

“The last round he caught me in my neck,” Guidry recalled. “I feel really good. I wasn’t supposed to make it this far.”

As the final seconds ticked off, announcer and International Boxing Hall of Famer Ray “Boom Boom” Mancini echoed many in the crowd and viewers at home by encouraging Guidry to “stay on your feet” and to “get up, get up” following the knockdown.

Following the co-main event, the world’s greatest boxing promoter reflected on the heavyweight showdown and entire night at the W.D. Packard Music Hall.

“That was a fantastic fight,” King opined. “Jonathan Guidry put on a tremendous fight, and the heavyweight champion got out by the skin of his teeth. I don’t know why Trevor (Bryan) wasn’t throwing his right hand as much as he could have. The whole card has been spectacular. I am just as proud as I can be.”

In the final title bout prior to the two world-championship co features, southpaw Johnnie Langston (10-3, 4 KOs, 1 NC), of Sarasota, Fla., earned the NABA cruiserweight belt by thoroughly dominating Nick Kisner (22-6-1), 6 KOs), of Baltimore, Md., en route to a fifth-round TKO. Unfazed by his counterpart’s decision to alternate as both a righty and lefty, the fighting Floridian recorded his first knockdown when a flurry of unanswered punches sent Kisner to one knee at 29 seconds of the fifth round. With the battling Baltimorean’s gloves up and displaying no signs of fighting back, Langston forced his opponent to one knee for a second time less than 30 seconds later. After Kisner nearly went down again and somehow remained upright despite wobbly legs, the 32-year-old Langston rushed forward and unleashed yet another barrage of unanswered punches before referee George Nichols stopped the bout at 1:40 of the fifth round.

“I knew that Kisner was slick, Langston said in the ring after. “I just put the punches together and started landing. When he (Kisner) switched back and forth and went southpaw, I landed the overhand left and followed it up with the right uppercut.”

Utilizing a 60-pound weight advantage, DaCarree Scott (7-0, 6 KOs), of Decatur, GA., captured the vacant NABA Gold Heavyweight title by registering a 10-round split decision over Ahmed Hefny (13-2, 5 KOs), of Alexandria, Egypt, via Queens, N.Y. Judge Brian Kennedy scored the bout 96-94 for Hefny, while Jamie Garayua and Nathan Palmer had it 96-94 and 97-93 respectively for Scott. Despite fighting three more rounds than he had in his six other pro fights combined and watching his six-bout knockout streak come to an end, the 23-year-old Scott pressed the action, working on the inside, landing body punches and brutal blows to his opponent’s head. Despite suffering a bad cut to his left eye due to an accidental headbutt early in the fourth and dealing with constant blood flow throughout the final six rounds, Hefny utilized an orthodox fighting style to rally and momentarily stun Scott with seconds to go in the eighth.

“I knew I could go 10 rounds,” Scott said. “It wasn’t a problem. The cut was a punch. He (Hefny) was missing punches, holding, and grabbing. I worked so hard. I deserve this title.”

Opening the six-championship fight card, southpaw Newburg, N.Y. native Tre’Sean Wiggins (13-5-3, 7 KOs) secured the vacant NABA welterweight title by scoring a third-round TKO over Cody Wilson (10-4, 7 KOs). Controlling the action from the opening bell, Wiggins recorded a knockdown with 10 seconds remaining in the second round by landing a flurry of punishing left hands to the head that sent his counterpart flailing against the ropes. After Wilson survived the round, Wiggins sent the Fairmont, W. Va., resident to the canvas with a devastating straight left hand at 1:41 of the third. Eight seconds later, referee Lonnie Scott stepped in and stopped the contest at 1:33.

“Everything went right,” Wiggins said. “I am the man in charge right now. This is only the beginning. I knocked the door down, now I am running through.”

In the walkout bout following the main event, Michael Moore (19-3, 8 KOs) of Cleveland, pitched a near shutout over Anthony Lenk (17-8, 7 KOs) of Niagara Falls, N.Y., earning a 10-round unanimous decision. The three judges all scored the bout 99-91. The NABA middleweight title was on the line for Lenk only, as Moore weighed in over the 160-lb. limit and was not eligible to win the vacant crown.