With a stellar knockout win, Floyd “Kid Austin” Schofield (12-0, 10 KOs) proved, yet again, he needs to be on every boxing fan’s watchlist. The young prospect defeated Daniel “Bad Boy” Rosas (22-5-2, 14 KOs) with a left hook to the chin in the first round. Originally scheduled for eight-rounds, the fight only lasted 1:37 as the main event of the Golden Boy Fight Night on DAZN show at Fantasy Springs Resort Casino.

“I manifested this knockout, and I just feel so good right now,” said Schofield. “This is the fight game, and I hope he is ok. When Oscar came into my dressing room, I almost had a heart attack – I was like dang – this is real. I’m happy and I’m proud of myself and my team. It’s a dream come true. I honestly feel like crying, but I am trying not to. I want everyone in my division!” 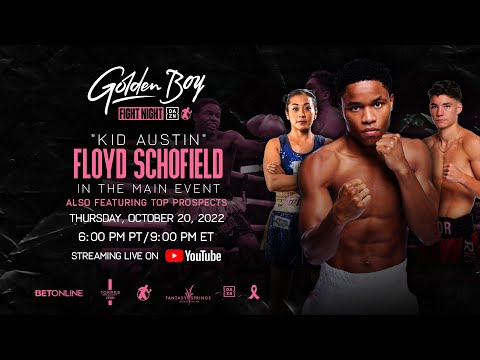 “The fight proved to be a hard one, but it was experience that helped me secure the win,” said Ortiz. “There were points in the fight where she would make me mad when she would grab me by the back of my head and I just wanted to unleash on her, but I knew I had to conserve my energy. Right now, I am going to eat a hamburger and drink a coca-cola, and then discuss with Roberto Diaz what my next steps are.”

Jorge Estrada (4-0, 3 KOs) of Mexicali, Mexico faced one of his biggest challenges since his pro-debut, and out-scored Tamaulipas, Mexico’s Sergio Gonzalez (6-11-2, 2 KOs) via majority decision win in a scheduled four-round, super welterweight fight.

Opening up the DAZN broadcast, Fort Lauderdale, Florida’s Eric Tudor (6-0, 5 KOs) added another tactical knockout win to his resume against Tucson, Arizona’s Ramon Marquez (5-3, 5 KOs). The referee calling the second-round stoppage win at 2:41 was inevitable, as Tudor sent Marquez to the mat twice in the same round.