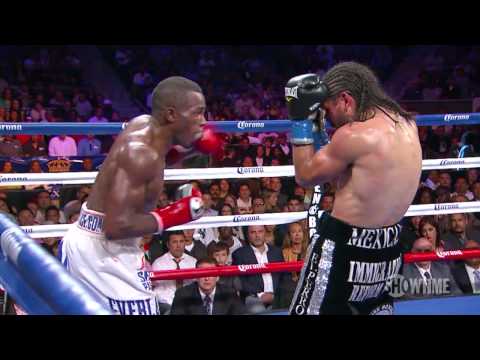 Welterweight Marcos Maidana (34-3, 31 KO’s) was simply too strong for Josesito Lopez (30-6, 18 KO’s) tonight in stopping him in the 6th round in a back and forth fight at the Home Depot Center, in Carson, California, USA. Maidana unloaded on a hurt Lopez in the 6th with a blizzard of punches until referee Lou Moret called a halt to the fight at 1:18 of the round.

Maidana was hurt in the 4th round, but came back to knock Lopez down in the 6th round with a scorching right hand to the head. Lopez climbed off the canvas and continued to fight, but he was way too hurt to fend off Maidana’s powerful shots being thrown with both hands. Lopez backed up to the ropes and took some really mean looking shots. At that point the referee stopped the fight because Lopez wasn’t throwing anything back at Maidana.

The first three rounds were clear rounds for Maidana, as he landed the harder shots in each of them. The first round was kind of close, but the better punches were landed by Maidana by far. He hit Lopez with some big, big shots when he was backed up near the ropes. That for me was more than enough to give Maidana the round.

Erislandy Lara (18-1-2, 12 KO’s) really got lucky tonight in stopping Alfredo Angulo (22-3, 18 KO’s) in the 10 round in fight that Angulo was in control of and on his way to a victory. Lara either thumbed Angulo in the eye or injured his eye in some other way causing him to turn his back on Lara. The fight was then halted. Right now, it’s still unclear whether Lara thumbed Angulo or if his was simply too hurt from the swelling around it. His eye had been swelling for rounds from the punishment he had taken.

Angulo knocked Lara down in the 4th and 9th rounds and he seemed like the stronger fighter going into the 10th. However, the eye injury changed everything and caused the fight to be stopped.

Other boxing results on the undercard: